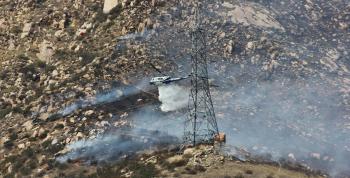 Photos and videos by Billy Ortiz

July 2, 2013 (Lakeside)—Firefighters from Heartland Fire, the U.S. Forestry Service, Cal-Fire and Lakeside Fire Department have attained 50% containment of a brush fire that consumed at least 110 acres Lakeside as of this evening.  The fire began along El Monte Road in light, flashy fuels this afternoon and burned portions of El Cajon Mountain (El Capitan).

Resources were quickly committed to this fast moving fire that soon moved into the National Cleveland Forest proper with agencies working under a Unified Command, established early on. The CHP shut down the area east of El Monte Park, which has been utilized as a base for helicopters.

No structures were threatened, though some residents did race to evacuate horses as the fast-moving flames approached.