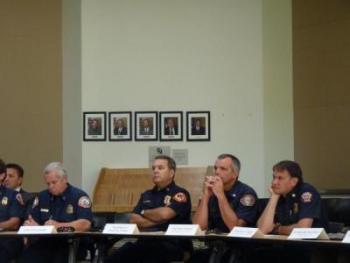 August 16, 2014 (San Diego) – In the wake of the May wildfires that resulted in a countywide disaster declaration, Fire Chiefs and elected officials from across the region met on July 31 at the Count Operations Center to assess what went right--and what areas have room for improvement.

Supervisor Dianne Jacob (photo, right) chaired the meeting.  She opened by reminding those present that the County recently shared a  Grand Golden Watchdog Award with the City and the Navy for their mutual response to those fires.   She cited improvements made in firefighting and wildfire preparedness since the 2003 wildfire and the formation of a County Fire Authority, adding, “We’ve come a l 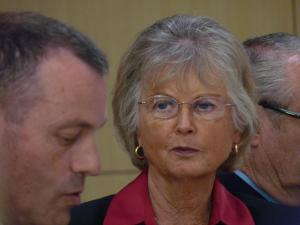 ong way, but we’d all like to be better prepared. What do we need?”  She emphasized that the session wasn’t focused on money but told all present, “We just want to know what you need?”

Tony Mecham, the new Fire Chief for CAL-FIRE’s San Diego division, came here from Riverside just four weeks before the wildfires scorched over 29,000 acres across North County, costing $60 million and claiming one life.  Mecham noted that response to such catostrophic conditions requires regional cooperation and “more than any single agency.”

Ron Lane, the County’s Deputy Chief Administrative Officer, said this was the worse season in along time.

Though the fires included both unincorporated county lands as well as incorporated cities such as Carlsbad and Escondido, Lane ran down coverage in the unincorporated areas. He said the County spends $272 a year per capita on fire services for its unincorporated area and that this is more than Los Angeles County spends on its unincorporated portion.  Today, San Diego’s unnincorporated residents are served 92% by fire protection districts, 2% by County-funded CAL-FIRE career stations and 2% by County Fire Authority reserves.  These three agencies will soon be combined into just one entity, he emphasized. The CFA covers 41,346 residents with 10 stations manned by reserves, 7 schedule A County-funded CAL-FIRE stations, and 9with Amador contracts for winter coverage. Average response times were 10.5 minutes in 2013, nearly half the 20 minutes deemed as the standard in the County General Plan for unincorporated areas.

The County has purchased 40 new pieces of apparatus since 2006 including fire trucks, water tenders, rescue and support items.  Lane called the County’s air fleet “probably the highest of any county in the U.S.” adding that San Diego has 10 aircraft available for an initial attack locally including aircraft from the U.S. Forest Service, Cal Fire, the County, City and SDG&E. In addition, some 30 extended attack support available from the U.S. Navy and Marines in the first agreement of its kind nationally, though those are subject to U.S. Defense Department needs and a memorandum of understanding.   A regional communication system has also had upgrades both internally as well as Alert San Diego, which can now reach 950,000 homes and businesses as well as 370,000 cell phones as well as many web users.

Chiefs from around the region spoke out on issues they would like to see resolved.

Oceanside Mayor Jim Wood praised firefighting responses but cited what he viewed as a critical gap.  “We didn’t have any air assets” in the early hours, he stated.  “We had one helicopter when Carlsbad was burning down. I believe it was a Sheriff’s. There wasn’t enough water.”  He said he made many calls trying to get more resources during the fires.  “I got frustrated. I called the Governor’s office and he said `You have lots of air support.’ I said `That may be, but where are they?’ He added, “Our Oceanside fire started in a riverbed.” With air assets that could have been knocked down early on, he stated.  As San Marcos and Escondido fires grew large, he claims he saw just two helicopters and no larger aircraft.

“I called Pendleton (the military base) and they said they couldn’t release air assets without CAL FIRE approval,”Mayor Wood said, adding that buildings were burning in downtown Carlsbad and Escondido at that time while the military was fighting a blaze burning only brush on the base.  The Mayor also cited a need for aircraft with night vision capacity for after dark.

A CAL FIRE representative said there were 15 helicopters fighting the Cocos fire at one point and noted that Camp Pendleton did have threats to base housing and critical infrastructure.

Wood fired back, “I could tell from the conversation that they would have responded, but they had to have CAL FIRE approval.”

Supervisor Jacob responded, “Excellent points. We will be following up.”

A Pendleton representative present agreed that more coordination is needed. “The desire is there to protect areas around the base,” he said, adding that some military families live in those areas.

But a San Marcos Fire Chief said that by the time the fire there began, the last of the major fires to break out, the aircraft situation had improved due to mutual aid. “I don’t think we could have fit another aircraft.”

A CAL FIRE representative said the goal is “to have an aircraft over any incident in less than 20 minutes.”  He said that 90% of fires under CAL FIRE command are limited to 10 acres of less.  “We are quite effective in normal situations.” 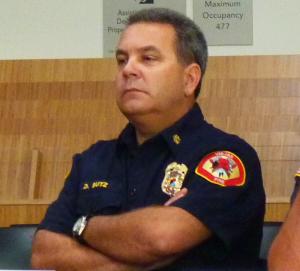 Chief Don Butz with Viejas Fire Department (photo, left) stated, “We are missing something in the County. We need the ability for night flying including night hoist rescues.”   But a County representative responded that over several months where were only two night rescues and those were lost hikers, not injuries. “Honestly we didn’t’ see it,” he said of the need for night rescue capacity for the County.

Chief Butz also asked for any fire chief to be given the authority to order brush cleared 100 feet from homes or 30 feet from roads.

Another Chief called for funding of code enforcement, citing a community with only one road in and out where brush clearance hasn’t been done.  Jacob asked for a list of County roads that need brush management.

Tim Geiser, President of the Deerhorn Fire Protection District cited Deer Springs near Escondido as a bad example of planning.  “We need to be sure before these communities are ever put in place that we can get people out of them.”

One fire official from San Diego indicated that city helicopters are often called out to the County for rescues and humanitarian missions. “We won’t leave anybody hanging,” he said, but added, “The County should be providing those operations.” He said there are not enough night flying capabilities and also wanted to see the County provide air paramedic services.  A County representative responded that the County provides mutual aid to the City as well.

Lane then asked the chiefs if our region has enough surge capacity engines and resources.  The answers varied widely but some cited a need for a better system.  One suggested surge capacity is needed for the communications center, too.

Mayor Wood asked about county probation camps to clear brush.  Jacob responded, “We do need more bodies and the Sheriff has them.”

Sheriff Bill Gore said the County now contracts with the state due to realignment, paying to take prisoners to work cutting firebreaks.  “We’re working it…but we can do better and we want more of them,” he said.

A Lakeside Fire representative said that “Lakeside and Santee, we all put in mutual aid agreements to protect each other every time and it’s been very effective.”  Other agencies should do the same,, he added.

Geiser from Deer Springs wants to see a priority list for equipment purchases to assess priorities.

One area not discussed was staffing of rural fire stations, despite concerns raised by East County residents and some firefighters over many dark days and station closures due to attrition outpacing recruitment of stipended volunteers.  Asked about the issue, Supervisor Jacob insisted, "It's not about closures. It's about response times." True, but while response times countywide have improved in the past couple of years, some East County residents have had long waits for emergency services, notably in Jacumba Hot Springs, where a resident died awaiting help due to closure of the closest fire station.

A Lakeside representative said at a mobilehome park fire in Lakeside, the Sheriff evacuated the area but “didn’t let the chiefs know. People were coming up to ask asking `Where’s Grandma?” We need a coordinated communications center."

A San Marcos representative said that “with the Internet, everybody and their brother is media.” He asked if parameters are needed to get into a fire area.

Lane said not everyone is getting news from media stations and that staying ahead of social media is a challenge. Putting out notices to the public to stay ahead of demand is important but it’s also important to be accurate.

Sheriff Gore said he wants to see “more input from legitimate media” on how to handle this issue.

Jacob said it’s important to have a point person to communicate “so we’re sending the same information out.” She wants to avoid “competing press conferences” with different agencies.

An Encinitas official said each entity should have a communications person to get messagtes out to the public, noting that a school trumped the city in one case to reach parents about school evacuation concerns.

Chief Butz from Viejas suggested the County could “educate the media”  with a fire academy training session and staging at the Emergency Operations Center.

Lane concluded that “media is a partner to us,” adding, “We are doubling down to make sure we know how to communicate.”

How can you tell the county is lying about the fire service? Their mouths are moving.