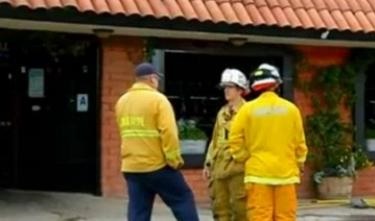 A delivery driver spotted smoke and called 911.  A nearby resident reported hearing an explosion, then also spotted flames coming through the roof.

Fortunately the Lakeside fire station was close by and crews responded promptly.  The fire destroyed the kitchen and also damaged a nearby business.

The owner of the restaurant, which has 50 employees, has she hopes to reopen in time for the Lakeside rodeo in April, after completing repairs.

Cause of the fire remains under investigation, but may have been due to an electrical wiring issue in a freezer, owner Ben Clevenger told KNSD news.