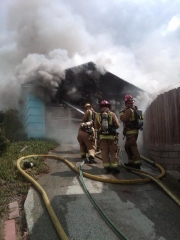 October 7, 2010 (La Mesa) – A fire at 4651 Pomona Avenue in La Mesa caused an estimated $75,000 in damage to a garage and its contents. Heartland Fire & Rescue arrived on the scene at 12:10 p.m., three minutes after receiving a call, to find fire engulfing a detached garage behind a home. As fire crews stretched hose lines to attack the fire, flames began spreading to a neighbor’s fence and vegetation.

Firefighters cut the garage door to gain access to the interior, where a 1960s Volkswagen bug also burned. It took firefighters about ten minutes to control the fire due to the heavy fire load inside the garage, Heartland Fire & Rescue reports.

The fire started from a shed behind the garage; cause remains under investigation. There were no injuries to civilians or firefighters.