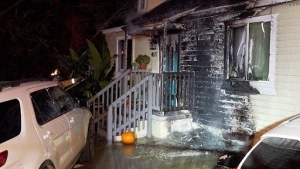 January 12, 2022 (San Diego) – An early morning fire at 4 a.m. damaged the City Heights residence of Nathan Fletcher, Chairman of the County Board of Supervisors, and his wife, former Assemblymember Lorena Gonzalez.

Gonzalez tweeted, “Our entire family is safe. No one is injured. That’s all that matters.”

Fletcher tweeted gratitude for the swift response by San Diego Fire and Police Department. He indicated the family was awakened by smoke alarms to find the front of their home engulfed in flames. They were able to evacuate safely out a separate door.

“San Diego Police Officers were immediately on the scene and the San Diego Fire Department was able to put out the fire and save our home,” Fletcher wrote. “We are grateful for their efforts.”

10 News reports the cause of the fire is under investigation.

The power couple has been through numerous ordeals in recent months including COVID-19 and Gonzalez’s battle with breast cancer. Gonzalez resigned her Assembly seat earlier this month to lead the California Labor Federation starting in July. Fletcher was just reappointed to another term as Chairman of the San Diego County Board of Supervisors. 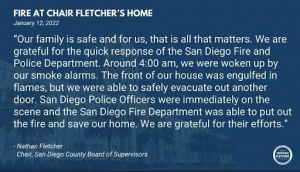