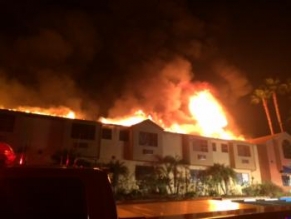 At 4:42 a.m., Heartland Fire & Rescue crews responded to reports of the fire, arriving to find heavy smoke and flames coming from the roof.

Heartland firefighters, with help from the San Diego Fire Department and Cal Fire/San Miguel, knocked down the fire in 40 minutes.

The blaze caused $1.5 million in damages to the Rodeway Inn, which is considered a total loss, according to Heartland Fire & Rescue.  Cause of the fire is under investigation.

No injuries were reported.  Those displaced by the fire are being assisted by the American Red Cross.