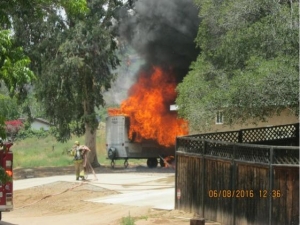 Bob Perry, a neighbor, says he went outside at 12:30 to get tools at the bottom of his driveway when he noticed heavy smoke and flames coming from across the street. “I reached for my phone, but cars had stopped and some were running towards the trailer grabbing a garden hose, he said.  After hearing a siren, he knew that help was on the way.

“The Sheriff was first to arrive, followed soon by four or five fire engines from the San Miguel Fire Department.  I took some cones and closed traffic on Fuerte to the south while a deputy closed it to the north,” Perry said.

He indicated that it appeared no one was home, but voiced concerned about a “very old man who lived in the trailer behind the house.”

Bortisser said he had no information on the resident of the trailer.

Perry said the fire was out fairly quickly once the fire department arrived.