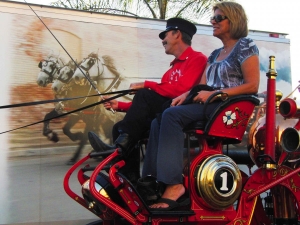 September 11, 2010 (Escondido) - In a scene reminiscent of classic Americana movies Grease and American Graffiti, 1957 Chevrolets and 1902 fire engines thundered up and down the streets of Escondido last night. 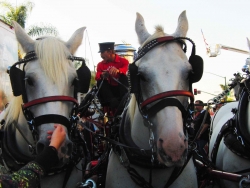 The community celebration known as Cruisin’ Grand features pre-1973 era American-made cars, which take over downtown Escondido every Friday night from April through September. This year, theme-based nights were added. The most recent cruise, in honor of September 11, featured classic fire trucks. The largest and most popular display was by the California State Firefighters Association (CSFA) showcasing a 1902 pump-only horse-drawn fire engine.

Spectators, young and old alike, delighted in the free rides that CSFA was giving on this vintage fire engine. This all-volunteer association travels state wide in an effort to educate the public about fire prevention. El Cajon resident and CSFA volunteer George Touscant (photo, below left) explained that the pump-only fire engine was capable of spraying 1,000 gallons of water a minute or “268 bathtubs full.” 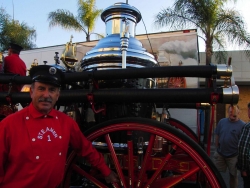 He reminisced on the anniversary of September 11, sharing how a fire battalion chief working in the aftermath of the first tower collapsing, saved several firefighters’ lives by ordering crews out shortly before the second tower collapsed. Crews from Beverly Hills, Los Angeles, Orange County, and Palomar Mountain fire departments brought some of their classic rigs as well.

According to Sue Dusharme, Director of Cruisin’ Grand, the idea was first suggested to the Downtown Business Association in 2000 as a way to generate more patronage for downtown Escondido businesses by Steve Waldron, himself a local businessman. 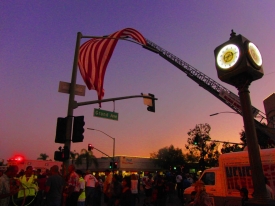 The classic car theme was tendered due to the architecture of downtown Escondido, which according to Dusharme is styled akin to the 1940s, 1950 and 1960s. Dusharme recalled the initial reaction to his proposal: “You bring the cars and we’ll do it.” Sure enough, Waldorn brought 50 classic cars and Cruisin’ Grand was born in 2001. In 2010, over 400 participated.

Cruisin’ Grand has more then lived up to expectations. Car enthusiasts from as far away as Australia have included their vintage cars in past cruises, according to Dusharme. Businesses have indeed profited from the popularity of Cruisin’ Grand, too.

“When Cruisin’ Grand is on in the summer, Friday is our busiest day. Just the opposite of non – Cruisin’ grand nights, when Saturdays are the busiest,” related Maria Green Manger of Filipi’s Pizza Grotto on Grand Avenue. 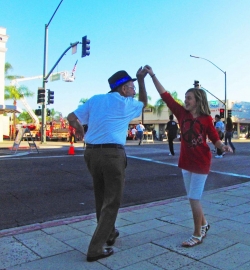 In addition to providing a revenue boom, Cruisin’ Grand is bringing families and the community together. Dusharme spoke of how grandparents and grandkids will huddle over an open engine discussing engine schematics. According to Amanda Kennedy (photo, left), an Escondido resident, age 11, “Everyone comes together to see the classic cars.”

While the need for events like this continues, funding is becoming a casualty of tight economic times. According to Dusharme, this year Cruisin’ Grand lost all funding from the city of Escondido and has had to rely on a myriad of strategies such as volunteer bands playing music, raffle tickets, selling cruise-based merchandise, and cutting expenses “to the bone”. In spite of these challenges Dusharme expects to keep Cruisin’ for the foreseeable future. 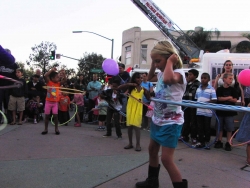 The night also included a parade of fire trucks, a showing of bumper-cars, a competition for best classic car and hula-hoop contests. There are two more Cruisin’ Grands this year. These will be on Sept.17 and 24. The themes for these will be Nitro night and Winners’ Nights respectively.

For more information go to http://www.downtownescondido.com/cruisin.html.