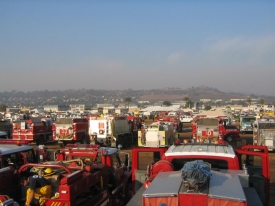 August 1, 2012 (Sacramento)—The Fire Districts Association of California has sent a letter to its members advising that the State is preparing to notify property owners within State Responsbility Areas (SRA) of the new $150 annual fee for fire prevention services under Assembly Bill 29—even if people are within an existing fire district.

“The local fire districts are placed in the unenviable position of shouldering the day to day expenses of providing services, while onerous fees are imposed on their constituents without any direct benefit to the jurisdictions,” states the FDAC, which opposed the bill and warns that the measure could imperial public safety.

California’s Master Mutual Aid System, in which districts cooperate to send aid when and where it’s needed is a model for the rest of the nation. But according to the FDAC, “This model of cooperation is now in jeopardy as agencies evaluate their willingness and ability to participate in this valuable program.”  That negative impact will continue for years to come unless the measure is repealed, the FDAC maintains.

The organization has recommended that fire district boards engage their constituents about each district’s opposition to the fees and to let residents know that the fees are being charged by the state—not the districts, which do not receive any of the revenues generated by the new SRA fees.  A sample resolution for boards to oppose the SRA fees was also included.

The SRA fees have drawn bitter responses and, at times, sarcasm locally.

“To cover us from SDGE started fires,” Alpine Community Planning Group member Lou Russo sniped in an email blasting the fees.  In an email to Supervisor Jacob, he alluded to fire mitigation grant funds that the utility company has been promoting. “Maybe SDGE can pick this up for us,” he said of the fire fees assessed on residents who feel twice burned. “They appear to have plenty of money to spread around.”

For decades the voters of California have been electing left wing, "progressive" legislegators and now everyone is surprised by the results, well, SURPRISE!