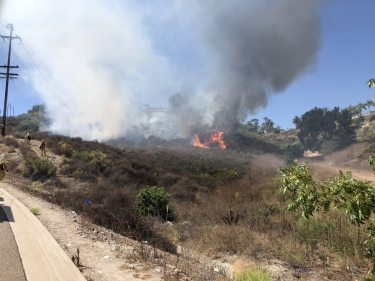 September 24, 2019 (El Cajon) -- Crews from multilpe agencies held a brush fire that began in a canyon around 1:10 p.m. today in Fletcher Hills to 1.5 acres, with no property damage or injuries reported.

Fire crews arrived within five minutes to discover approximately half acre of brush on fire in medium to heavy fuels in a canyon advancing towards houses at the top of Berenda Pl and Chiswick Ct. in El Cajon. Additional engines were called to protect the houses. A helicopter capable of dropping water was also called to assist with the fire. The fire was knocked down in approximately 45 minutes and ended up being approximately 1.5 acres.

The cause of the fire is currently under investigation.