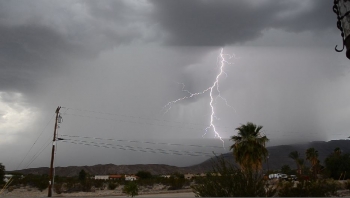 Update: The fire is now out but the roadway remains flooded and there are many other hazards. Lightning strikes are reported in the Warner Springs area and other locations including the bolt shown at left, taken by Bob Kutscher. This strike apparently ignited the fire, with smoke visible on a second image moments later shot from Borrego.

September 6, 2013 (San Diego’s East County) – A fire truck en route to a fire reported in the Scissors Crossing area near Julian has become stuck in the mud.  Highway S2 is shut down from State Route 79 to S 22 and a Sig Alert has been issued.  The fire truck initially became stuck after encountering a road washed out by flooding at 79 en route to Montezuma, according to the California Highway webpage. Smoke is also reportedly visible form Vista Point; it is unclear if this is the same fire.

On Mt. Laguna, mudslides are reported on Sunrise Highway between I-8 and mile marker 18; Cal Trans is responding. Rockslides are also occurring on Old 80, the National Weather Service reports. In the desert, downed powerlines are reported on Rango Way and Borrego Valley Road.

A flash flood warning remains in effect until 430 p.m. for Southeastern San Diego County.Shortly before 3 p.m. National Weather service Doppler radar continued to indicate moderate to heavy rain in the area from Cuyamaca Peak to Campo. Storm spotters reported flooded roads in Pine Valley. Locations in the warning include but are not limited to Morena Village, Potrero, Campo, Descanso, Cuyamaca Peak, Highway 79, Sunrise Highway, Tierra del Sol and Interstate 8. A flash flood watch remains in effect across many other areas, along with a high heat warning.

Sign up to receive free Viejas Emergency Alerts at the top right side of our homepage and also receive a free weekly copy of East County Magazine. You can also follow ViejasAlerts on Twitter for brief alerts on your mobile phone. We recommend all of the above since you don't know what form of communications will work best in a major regional emergency.