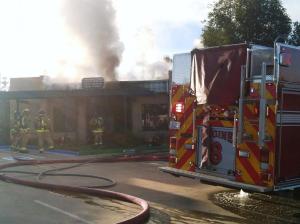 Heartland Fire and Rescue along with Cal Fire responded to the blaze at 1321 East Main Street, at the corner of East Main and Melody Lane, at 8 a.m.  Crews found heavy smoke coming from the clinic.  The building was occupied, but fortunately those inside were able to escape and call 911. No injuries were reported.

Fifteen firefighters battled the blaze, bringing it under control in about 20 minutes. But the building sustained heavy fire and water damage, and the clinic is considered a total loss with an estimated $200,000 in damages.