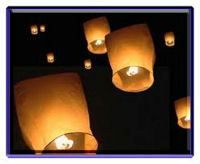 By Miriam Raftery
June 12, 2012 (San Diego’s East County) – A complaint by East County Magazine reader Mary Rajknecht has led Wal-Mart to agree to pull flammable “sky lanterns” off store shelves statewide. Rajknecth notified ECM and local fire officials that the product could be dangerous in our fire-prone area, prompting a warning from the state Fire Marshal's office to be issued.

On May 29, Rajknecht contacted ECM to advise that she was surprised to find Celebration Sky Lanterns on the shelves of a Wal-Mart store on Los Coches Road. “They are a tissue paper balloon that has a fuel cell that you light on fire,” she wrote. “When the lantern heats up (like a mini-hot air balloon) you release it and watch it `slowly ascend into the sky.’”
The State Fire Marshal's office has issued a bulletin advising that althought he devices are not considered fireworks, several ordinances enable locall fire authorities to have them removed from sale and make clear that Sky Lanterns are dangerous.
James Pine, fire marshall for San Diego County Fire Authority, said CFC Sec. 308 1.6 prohibits “open flame devices” in areas at risk for wildfire.
Sky lanterns have traditionally been used in Asian celebrations. Locally, Wal-Mart stores have voluntarily agreed to pull the products from store shelves after being informed that the devices posed a risk of starting wildfires.