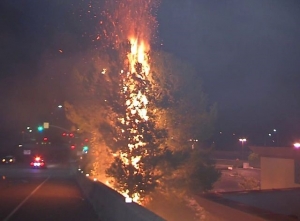 Heartland Fire & Rescue crews, as well as San Diego Fire-Rescue, responded and doused the blaze before it could spread to the store.

Authorities have not yet released a cause of the fire. The area where the fire started is a known homeless encampment but it is not yet known how the blaze began, authorities told  ECM 10 News.