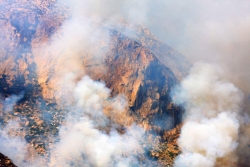 July 13, 2011 (San Diego’s East County) – As controversy burns around the new fire parcel fee signed into law by Governor Brown, many area residents have asked which communities and what types of structures are subject to the fees. East County Magazine spoke with Cal Fire spokesman Daniel Berlant in Sacramento. We have answers--and a detailed map.

The bill requires a fee of up to $150 for each structures intended for human habitation. That includes mobile homes as well as conventional housing. So a lot owner with a house and a mobile home for relatives or renters, for example, would be required to pay double.

Non-habitable buildings such as barns, sheds, or well pump houses would not be levied a fee.

Only homeowners in designated State Responsibility Areas will be required to pay the fee.

“Inside incorporated cities, there is no State Responsibility Areas,” Berlant clarified. So if you live in the city of San Diego or any of the incorporated cities within the County, such as La Mesa, El Cajon, Lemon Grove and Santee in East County, you’re off the hook. Federal lands are also exempted.

Some, but not all, of the unincorporated areas locally will be subject to the fire parcel fee.

You can look up your home on a map at this link to determine if you’ll need to pay or not: http://frap.cdf.ca.gov/webdata/maps/san_diego/sramap.37.pdf. If you zoom in several times, you will be able to see names of communities, roadways and other details. Only property owners in the areas shown in yellow will be required to pay the fee.

In San Diego, the State Responsibility Area includes just under 1.2 million acres, meaning a substantial number of East County residents will be subject to the fee.

Some details remain to be worked out, such as when the fee will be levied and what penalties will be assessed for those who pay late, Berlant said. A working group is begin set up to determine details and some clean-up language, after which the Board of Forestry and Fire will make final determinations on such matters.

The fee has sparked controversy and objections from rural residents. Supervisor Jacob has called the measure “double taxation.” The measure may also face legal challenges. Issues of constitutionality and fairness have been raised.

Some rural residents have complained that they are being unfairly singled out to foot the bill for fighting fires caused by others—in some cases, fires in which no firefighters ever showed up to battle blazes at their homes.

Yet the bill does nothing to strengthen firefighting capacity.

“The bill was to backfill behind,” Berlant confirmed. In fact, the new state budget actually cuts the number of firefighters from four to three on each Cal-Fire engine, also making other cutbacks to the department.