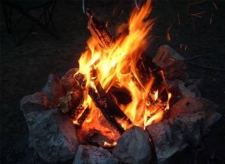 December 20, 2012 (San Diego) – Effective Tuesday morning at 6:00 am, December 18, 2012, fire restrictions on the Cleveland National Forest were reduced to the “General Level.” The recent rain and cooler temperatures have lessened likelihood that small fires will become larger fires.

“While the height of our fire season may be coming to an end, we urge that people stay vigilant to prevent wildfires,” said Carlton Joseph, Fire Chief for the Cleveland National Forest.  “Our fire season in southern California is year round, and we remain ready to respond to these emergency situations.”

The purpose of fire restrictions is to reduce the risk of human-caused fires throughout the year.  Fire restrictions impose limitations on forest users and are implemented to help prevent wildfires.  The Forest Service’s Fire Restriction program restricts the conduct of activities that have historically caused wildfire starts on the Forest.

The Cleveland National Forest fire restriction system works in conjunction with the daily Fire Danger Rating System, commonly referred to as the “Smokey Bear fire danger level.”  The Fire Danger Rating System is a scientific calculation that takes into account several factors such as fuels conditions, expected weather effects on fuels, burning indices, live fuel moistures, and energy release component calculations, to establish the likelihood of a fire starting within a 24 hour period.

“While the public might see our daily fire danger rating in the low to moderate categories for the next several months, wildfire can still pose a danger.  Fire prevention activities need to continue throughout the entire year, and the public needs to be extremely careful when recreating within the Forest,” added Joseph.

The daily Fire Danger Rating System and the fire restrictions level are posted and updated on the Cleveland National Forest web site at http://www.fs.usda.gov/cleveland.

Contact your closest Forest Service office to find out the current information concerning fire danger across the Forest, and the level of fire restrictions currently in affect before you head into the Forest.

“Know before you go!” Forest contacts for current information

For Alpine, Descanso, and Laguna Mountain areas contact the Descanso Ranger District at (619) 445-6235.

General Fire Restrictions are the standard, baseline restrictions that are always in effect on all areas with the Cleveland National Forest.

1.    Fireworks are never allowed on the Cleveland National Forest.

2.    Spark arrestors are required for all off-highway vehicles, chainsaws, and other internal combustion equipment.

3.    Welding, grinding, cutting and the use of explosives are allowed only with proper authorization issued by Forest officials.

4.    Wood or charcoal fires are allowed only in developed campgrounds and developed picnics areas within designated fire rings.

5.    Gas, liquid, and jelly petroleum fueled stove are allowed in developed campgrounds, developed picnic areas, and other areas with a proper permit.

6.    Discharge of firearms is currently prohibited on the Forest except for the purpose of hunting during the designated hunting season as established by the California Department of Fish and Game.  Target shooting areas are not currently available on the Forest.