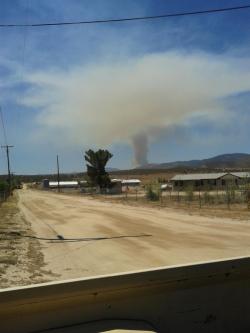 Update 7:30 p.m.  The fire has charred 150 acres and burned two homes.  Residents are now being allowed to return home, with ID.  The Julian 4th of July Parade has been cancelled, CHP advises,  though other activities including the American Legion BBQ will go on.

Update 12:35 p.m.:  This fire is now 75-100 acres in the Julian area, Air Attack estimates, with potential for extended attack. Two structures are reportedly damaged. Evacuations now include Kenwood and Whispering Pines. Temperature is 90 with 14% humidity and possibility of thundershowers tomorrow.

July 3, 2014 (Julian) -- A brush fire burning along Banner Grade west of Julian has charred an estimated 30-40 acres or more. The Whispering Pines area is being evacuated with 200 homes there threatened, Cal Fire confirms shortly after noon today.

The Julian High School has been set up as an evacuation area.

If you have photos or details on this fire or others, please send to editor@eastcountymagazine.org.

Sign up for free Viejas Wildfire & Emergency Alerts at the top right side of our homepage and also receive a free weekly copy of East County Magazine. You can also follow ViejasAlerts on Twitter for brief text alerts on your mobile phone. We recommend all of the above since you can't be sure which communications will work during a major regional emergency.

We appreciate the news of our areas, even though it is bad!!