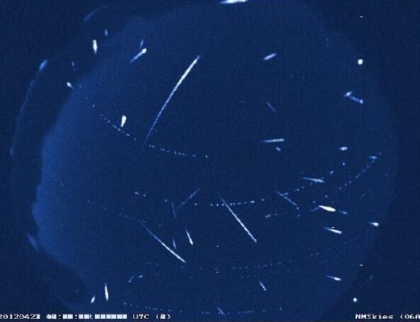 April 16, 2021 (San Diego’s East County) – Look up during the early morning hours April 16-30 and you may be treated to a view of the Lyrids meteor shower. Called the "Old Faithful of meteor showers" by Space.com because their peak usually lasts for several hours, the Lyrids are known for producing fireballs, or meteors with trails of glowing, ionized gas in their wake.

Space.com offers this helpful advice to locate the Lyrids:

"The paths of these meteors, if extended backward, seem to diverge from a spot in the sky about 7 degrees southwest (to the lower right) of the brilliant blue-white star Vega in the little constellation Lyra (hence the name 'Lyrids').

"Your clenched fist held at arm's length covers roughly 10 degrees of the sky. The radiant point is actually on the border between Lyra and the adjacent dim, sprawling constellation Hercules. Vega appears to rise from the northeast around 9 p.m. your local time, but by 4 a.m., it has climbed to a point in the sky nearly overhead."

But that’s not all.  The Lyrids overlap with another meteor shower, the Eta Aquariids, which runs April 27 to May 28, peaking May 4-6.  The Aquariids will feature fast-moving meteors in the morning sky, but are not known for producing fireballs as the Lyrids due.

Also coming up are three consecutive supermoons, with the next one rising on April 27. According to NASA, a supermoon occurs when a full moon comes while the moon's orbit is closest to Earth, making  the moon appear a bit brighter and larger than usual.

For the best viewing conditions, head out to a dark area away from city lights.