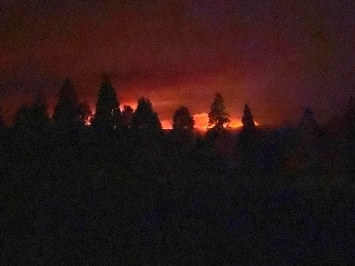 In Butte County, seven people died in the Bear Fire, part of the North Complex Fire, when the firestorm traveled 30 miles in a night, trapping residents at Berry Creek. The victims ranged in age from 16 to 70, CNN reports.

Michael Gerrard, director of the Sabin Center for Climate Change Law at Columbia University, concludes, “Maybe we underestimated the magnitude and speed” at which these events would occur, he said, but “we’ve seen this long freight train barreling down on us for decades, and now the locomotive is on top of us, with no caboose in sight.”

For the latest information on California wildfires, see https://www.fire.ca.gov/daily-wildfire-report/.

Such a horrible way to die. Climate change is real.