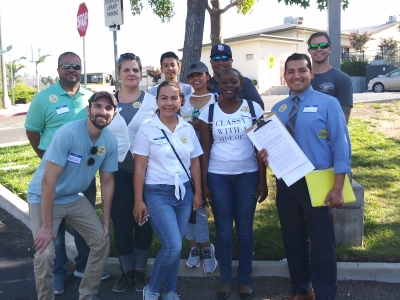 September 15, 2019 (Lemon Grove) – Firefighters led volunteers who spread out through Lemon Grove yesterday to collect signatures on a ballot measure that would bring Lemon Grove's sales tax on par with La Mesa, raising it by ¾  a cent. The measure, if approved, which would nearly double the amount the City receives as its share of the sales tax.

Proponents have 15 more days to collect enough signatures, but are not on track yet to meet the September 30 deadline to put the measure on the ballot.

The future of the city hangs in the balance with Lemon Grove struggling financially. The vast majority of revenues fund Sheriff and firefighting, with not enough left over to fund projects sought by residents such as sidewalks, road improvements, recreation programs and more.

The group hopes either a huge donor comes through with funds for a much higher per signature bounty, and/or local clubs, organizations and individuals to announce their walks to email lists and phone trees, the same way firefighters did yesterday.

A similar measure passed in neighboring El Cajon during the great recession with massive help of police, fire, and a fiscally responsible republican City Council.

Brad Maxfield, Union President of Heartland Firefighters, told East County Magazine “I've worked in the City for 10 years now. I've seen it through its ups and downs. Now, public safety is getting depleted as well as many other aspects of the City. We need a tax to raise the funds the City needs to serve its citizens.” 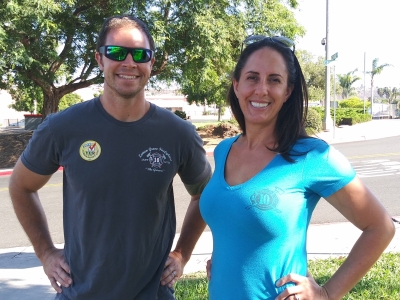 Photo, right: Firefighters Brad Maxfield and Suzanna Hales, out in the heat to collect signatures

“I've been walking door-to-door since August,” said Suzanna Hales, engineer with Heartland Fire. “It's been a really positive experience: coming into contact with residents whose eyes light up when I tell them that these funds will be going towards fire and emergency services, and generating economic growth, and that these funds will stay in the City.”

“I'm missing Georgette Gomez's kick-off to be here,” lamented Professor and UCSD advisor George Gastil, referring to the San Diego City Council president’s Congrewsional candidacy announcement. Councilman David Arambula was also there in shorts and a T-shirt, on a hot summer day that forced plans to change slightly, in order to protect the volunteers.

“Currently, our sales tax is 7.75%, and we're only getting 1 cent. This would increase it to 1.75 cents,” Yadira Altamirano, Proponent, and Lemon Grove Business Owner, told volunteers, including several firefighters who showed up to try and save public safety, and the sliver of the general fund Lemon Grove spends on other things, such as road repair, public safety improvements and public parks.

East County Magazine pressed Gastil on the reason for a $1.2-$1.8 million revenue enhancement when the shortfall is currently $400,000 a year, this year, saved by a one-time loan repayment.

Gastil replied, “It's a long-range structural issue. The cost of public safety personnel goes up more each year than our city revenues go up. This would also put us in a much better position if we go into a recession, and I was on the Council last time we had a recession, and also on the School Board during another recession. If it looks like we have more than we need, that's not really a problem. That's because there is a good economy right now, and thus any extra revenue would go to one time expenses instead of long-term commitments, except of course, for our police and fire contractual commitments, and there is a community advisory committee that I hope would track how much is raised and give recommendations for how it is spent, and track how it is spent, so the public will always know where this money is going.”

There have been rumors of disincorporation, something proponents are trying to avoid. They also worry whether the County, La Mesa or San Diego would be willing to take over the area, given its revenue short-fall and public debts--debts which the other entity would also be forced to acquire.

Councilman Jones has emailed ECM to indicate he now supports the ballot measure, after the amount was increased from a half-cent to three quarters of a cent. "I’ve done the calculations and that gives us 10 years at the status quo and enough money at the beginning to invest in programs and infrastructure to make us more sustainable," he says, adding, "The challenge will be in making them spend the money wisely."

Please also feel free to participate in the comments below with your thoughts for or against Lemon Grove's proposed sales tax parity with La Mesa.

My street was first paved around 1959. It was slurry sealed about fifty years ago and now the aggregate rocks stick out like little sharp spikes. I realize the City can't afford to do much with it's limited tax base. When College Grove was built businesses collapsed like a house of cards. I remember my parents shopping at the five and dime stores and I used to go to Broadway Hardware for plumbing and other home repair parts.

Services cost money and the money comes from taxes  (or grants) so raise taxes and begin to do the much needed work.

Councilman Jones emailed a more detailed explanation of his views on the sales tax issue below.  We appreciate him providing this in-depth perspective.  (Others in Lemon Grove, please feel free to share your views, too, in our comments section.)

"In 2018 I opposed the ½ cent sales tax proposed by staff because it was not enough to sustain the city beyond 5 years at the status quo, Council and staff had not done the work necessary to pass a tax measure, and we had not done a survey to gauge support in the community for a tax measure. Based on my data and projections, what was needed for the 20 years of the tax was a full cent tax. I opposed the 2018 tax measure not on principle but on data.

At the time I made suggestions for next steps in preparing for a successful ballot measure for the 2020 election. Those recommendations included 1) Stop on all increased spending and a to do a deep dive into possible savings in the budget. 2) I recommended a separate Marijuana tax not tied to a measure that included business licenses. That did not get Council support for 2018. 3) I recommended an open discussion of the options of bankruptcy and disincorporation. Not because that’s what I want either as a homeowner or council member but because the public has a right to know what the options are before them. Based on my memory of a similar discussion in 2010 the options were not better for us. It is not an option that I want personally but I believe in transparency concerning this subject. I believe that we can either define what these things look like or someone will do that for us, and that definition may not be accurate. 4) I recommended that we commission a survey and based on public input that we direct staff to develop a spending plan and prepare for a Council driven ballot measure for 2020. 5) Conduct outreach to the business community. 6) Conduct public outreach to as many people as possible in developing spending priorities that reflect the broader community’s desires. 7) Mayor and Council work with the community to form an independent coalition to support and pass the measure. 8) Place the measure on the 2020 ballot.

To date we have 1) Done the deep dive into the budget and found no stone unturned. 2) We missed the chance at a Marijuana tax on the 2018 ballot, but we have had a discussion about something for the 2020 November ballot. This tax will help but will not solve the structural problems in our revenues. 3) We have not had a Council discussion on disincorporation though council did receive a memo from the City Attorney. Of course, in these kinds of things there is lots of speculation but more on that later. 4) We have still not done a survey, but the City Manager did dig up the survey we did on 2010. She strongly believes we don’t need one and frankly it’s not a deal breaker for me currently. 5) At this time there has been no outreach to the business community but since this is currently a citizen driven initiative there is time for that. 6) We have done little to no public outreach Though I personally have invested a fair amount of time in the Next-Door app reaching out to the 1200 members of that forum on what they want and supporting a tax measure. Before we knew about the citizen initiative. Racquel kept that from Council. 7) The Mayor put together the coalition that is now out getting signatures. I presume that if they get it qualified that they will work with Council to past the measure come election time. 8) If the citizen effort fails to qualify for the Primary, I will support a council driven measure and have suggested to the City Manager that she be prepared to make this happen.

Why have I changed my position on the tax? Personally, and as a homeowner I do not believe that we would be better served by the County. Based on my memory of the report Council received in 2010 we would see less law enforcement not more. First off, the city pays for the Lemon Grove Sheriff’s Office since the Substation moved to Rancho San Diego and that would likely go away. Keep in mind that all deputies serving Lemon Grove under contract can do traffic enforcement now but would not under the county. Under the County, not only would we would likely see less patrol coverage, but all traffic enforcement would be done by the CHP. In that case we would probably share the patrol with Spring Valley.

It is also important to note that not all functions currently covered under the city would necessarily revert to the County if indeed the County would take us back. Things like the Redevelopment Successor Agency, Sanitation District and Fire Department could remain as standalone agencies requiring elections, governing boards and administrations for each. That adds up to additional costs to the ratepayers and taxpayers as those positions would not be shared with the city as they are now. In addition, all assets of the City that are conveyed to the County would be used to pay off any liabilities and debt the City may have. If the assets do not cover the debt, and that is doubtful, then the Supervisors can levy a property tax to eliminate the debt or liability. Either way the Lemon Grove community will end up paying some sort of additional tax. Better to be the masters of our own destiny.

In 2018 we had plenty of reserves and time to get a proper tax and tax measure effort together for 2020. I wanted a full cent but a ¾ cent tax will work with some effort by Council. I was very clear why I opposed the 2018 effort and right now enough of the important things that I asked for have been addressed. Now is the time to go to the voters.

In answer to the question you posed to George on the 3mil revenue when the deficit is just 5k. That is this years deficit.  That will continue to rise over time and we will have to do some economic development to make it sustainable.  Add to that the fact that the city has been operating at base level services and people want, and deserve, more. "