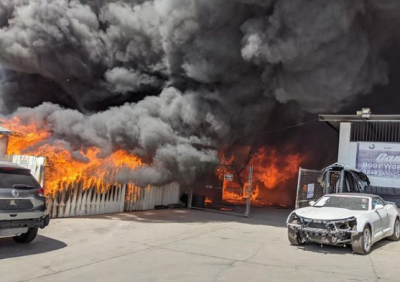 According to Heartland Fire in a post on Instragram, Initial arriving units encountered heavy fire and smoke from behind an auto wrecking and recycling facility. The smoke column was pushed by a strong west wind which produced an immediate threat to exposures including businesses and an apartment complex.

Crews encountered several explosions of compressed gas cylinders and a power line down across one outbuilding which presented challenges to mitigating this incident. SDG&E crews de-energized the power line, enabling firefighters to move forward into the structures in an aggressive attack, limit the spread of the fire and save all exposures.

Jamacha Road was shut down between Presioca Street and Grand Avenue for several hours and hazmat units from the county and city of San DIego  responded to provide air and water runoff monitoring to ensure there was no threat to citizens, firefighters, and the environment.

There were no injuries reported and the cause is under investigation by the Sheriff'sf Bomb Arson.