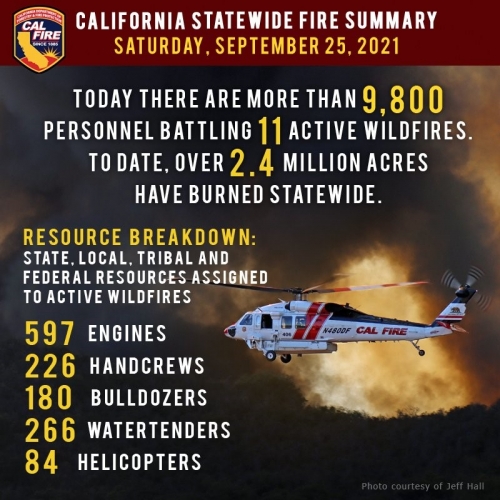 September 30, 2021 (Sacramento) -- Over 10,400 firefighters are on the front lines battling 11 major wildfires burning across the state, making headway on many of the most devastating blazes, Cal Fire reported over the weekend. Get the latest fire updates in California at https://www.fire.ca.gov/incidents.

The Unified Command Fires (including the Dixie Fire in Butte, Plumas, Lassen and Shasta Counties) is the second largest wildfire in California history and the 14th most destructive. The blaze has scorched nearly a million acres (963,309) but is now 94% contained.

The KNP Complex Fire which has threatened giant sequoias in Sequoia National Pak is still only 11% contained, however, after burning 49,349 acres in Tulare Cunty; this includes the Paradise and Colony fires. The Windy fire in Sequoia national Forest, however, remains just 35% contained after burning 88,068 acres.

Smaller fires include the Fawn Fire in Shasta County, which burned 8,578 acres and is 90% contained, with evacuation orders lifted but some evacuation warnings still in place. The French Fire in Kern County is 98% contained after burning 26,535 acres including pat of Sequoia National Forest.  In Alpine County, the  Tamarack Fire damage included Humboldt-Toiyabe National Forest, burning 68,638 acres with 84% containment.

California remains dry and ripe for wildfires, so Cal Fire urges all Californians to take precautions and be prepared to evacuate if asked.

Since the start of this year, 7,758 wildfires have burned more than 2.4 million acres in California, setting a new state record – and it’s only the end of September.

Get the latest fire updates at http://fire.ca.gov/incidents.