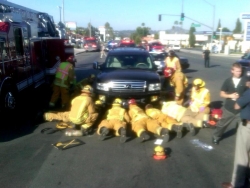 June 3, 2011 (El Cajon) Updated 8 p.m. -- A 9 year-old boy was struck by a vehicle at Madison Avenue and East Main Street while riding his bike to school at 7:24 this morning.  Trapped under an SUV, the boy was crying for help, Incident Page Network reported.

Firefighters attribute a bicycle helmet to saving the boy's life. Photos show abrasions on one side of the helmet and tire tread marks on the other side.

"El Cajon Police Office Tim Roberts was among the first on scene who found the young man pinned under the vehicle," said Monica Zech, spokesperson for the City of El CAjon.  "He calmed the boy down and stayed with him until fire arrived." 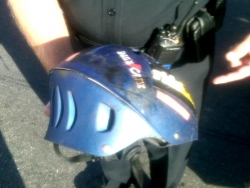 Heartland Fire & Rescue used airbags and cribbing to safely lift the vehicle off the child in a dramatic rescue.

The victim was transported to Children’s Hospital and has since been released, having suffered only minor injuries.

When the boy returns to school, El Cajon Police plan to present him with a new helmet at an assembly wtih fellow students to remind them of the importance of wearing helmets.