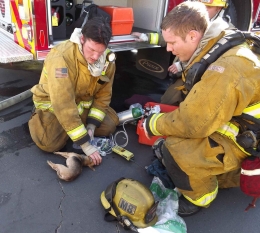 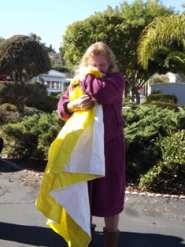 January 4, 2012 (El Cajon) – A homeowner escaped her burning mobile home this morning, but her chihuahua dog, Mojo, was found unconscious and near death. Thanks to dedicated efforts  by local firefighters, however, Mojo's live has been saved.

“The owner escaped the fire unharmed, but during a primary search of the home, El Cajon Firefighter/ Paramedic Brendan Saffer found the owner’s dog, a Chihuahua, unconscious and near death,” said Monica Zech, spokesperson for the City of El Cajon.

Once outside, Firefighter/Paramedic Travis Timmins, utilizing a pediatric oxygen mask, gave the dog oxygen.  Timmins was able to resuscitate Mojo after almost 10 minutes.   The dog was transported by El Cajon Police Department Animal Control to the Broadway Animal Medical Center where it is being treated for smoke inhalation.  Fortunately, Mojo is expected to make a full recovery.

The mobile home is considered a total loss, with damage estimated at $40,000.  Cause of the fire is now under investigation.