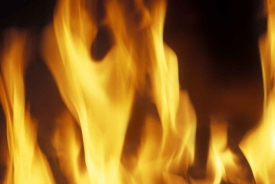 February 16, 2019 (El Cajon) – Heartland Fire and Rescue crews extinguished a blaze Monday night in the garage of a home in the 1500 block of Condor Ave. in El Cajon.  Residents were reportedly doing laundry when they smelled smoke and found their garage on fire.

Firefighters cut open the garage door to access the flames and were able to douse the fire within 10 minutes, saving the residence where eight people reside.