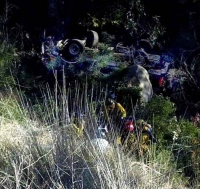 January 7, 2010 (Crest)-- A difficult but successful rescue was made Thursday afternoon by members of the San Miguel Fire District. Crews were called to La Cresta Road near Coyote Ridge moments after a vehicle veered off the road and plummeted down a 300 foot embankment. A large SUV with two occupants rolled several times down the steep embankment and landed on its roof.

The driver and passenger were both wearing seat belts. Both female victims, in their middle to late teens were able to get out of the crumpled vehicle on their own.Once reaching the victims, firefighters first stabilized both and ran several lines below to bring each victim up in a separate rescue basket. Early indications suggested their injuries were moderate to mild.  The occupants, who are sisters, were transported to a local hospital for a complete evaluation.

Traffic on La Cresta Road was reduced to a single lane during the rescue and efforts to salvage the vehicle. The California Highway Patrol is conducting the investigation into the cause of the accident.  Police and fire departments from El Cajon and  Lakeside joined in the rescue effort.