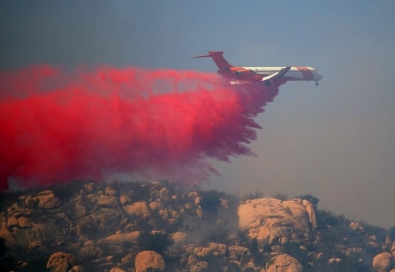 By Miriam Raftery
Photo, left, by Carol Foster
May 15, 2021 (Lakeside) – Forward spread has been halted on the #Shauntau Fire, which started near Shanteau Drive and Flinn Springs Road in Lakeside this afternoon.

Cal Fire and other units responded quickly to the vegetation fire, stopping the blaze at three acres. Crews remained on scene for several hours to mop up. 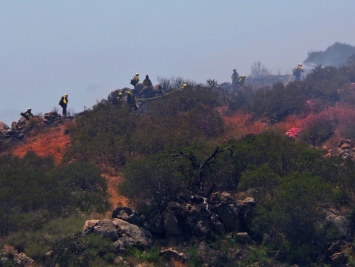 Renee Owens called 911 to report the fire that she saw from her Blossom Valley home. As an enormous plume of smoke formed, she wrote on Facebook, “Within minutes of calling the emergency number the firemen were ON it, tanker, helicopters, firefighters….I am totally impressed at how fast the response was,” adding that helicopters were able to scoop water from a nearby lake.
Owens says her dog hid in a closet as the house filled with smoke before firefighters successfully doused the blaze.