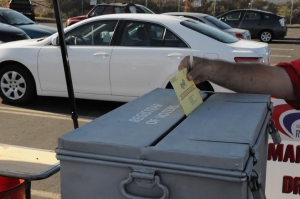 June 6, 2014 (San Diego County) - The voter turnout in the San Diego County for the June third primary elections surpassed expectations of a low turnout, the results were 20% equalling to 1 in 5 registered voters casting a ballot.

Reportedly 317,510 ballots in the county were cast out of 1.5 million registered voters according to Secretary of State Debra Brown’s office.

There’s been many predictions of what the voter turnout would look like. While some fell flat and others too much, the overall predictions were low entirely. Vu predicted a 35% turnout, while the National University System Institute for Policy Research predicted 18-23%, because “the low voter fatigue and low profile contests”.

Carl Luna, a professor from La Mesa college said, “We just had fires in San Diego, that probably disrupted things. There was no high-ticket, sexy component to this race. The governor’s race is a yawn, it’s not like it’s the presidential race. It’s a perfect storm of disinterest. That being said, San Diegans will now have to live with the results of their disinterests. Hopefully they’ll be more motivated in the fall.”

Polls closed at 8pm, but most San Diego County have decided to cast their ballot via email rather than going to a polling station.

Over the past 18 months, San Diegans have voted for a new mayor, a state senator, a city councilwoman, and an assemblywoman-mostly in special elections. The mayor and council races each resulted in two votes, a primary election and a runoff.

If you do not vote in an election your citizenship should be put on hold till you vote in the next election. Or Raise the voting age to 35.
The story goes that after deliberations of the Constitutional Convention of 1787 a woman in Philadelphia asked Benjamin Franklin, “Well, Doctor, what have we got, a republic or a monarchy?” With no hesitation, Franklin responded, “A republic, if you can keep it.” I think this was a warning that we need to fight to keep our freedoms and our way of life. The low voter turnout shows people’s sense of disenfranchisement and although somewhat expected is not good sign for our republic. I am hoping that my platform of supporting good paying jobs, lower taxes and education will attract more to my campaign as it swings into full action for the November general election. I am challenging Brian Jones to do the right thing and accept a public debate so that the voters can understand our differences and why I think I would better support the people of our district. Getting our community involved by publicly discussing important issues is the only way to get the voters involved, and make this a better place to live for everyone, not just the 1% or special interests. Tony Teora for State Assembly www.tonyteora.org