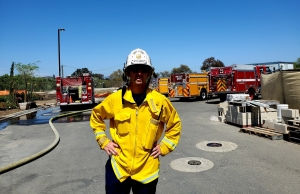 May 5, 2021 (Santee) Two fires broke out in Santee today, the afternoon of Cinco de Mayo. Santee Fire Department’s  Deputy Fire Chief Justin Matsushita (photo), interviewed near the corners of Meadow Way and Riverview Parkway near the San Diego River, said his department got a call on the riverbed fire at 1:10 p.m. and had the fire extinguished in 45 minutes.

“It was four acres, and it is under investigation,”  said Matsushita regarding the fire in the bed of the San Diego River.   The fire started at/near a small homeless encampment. “There were no fatalities,” he added, 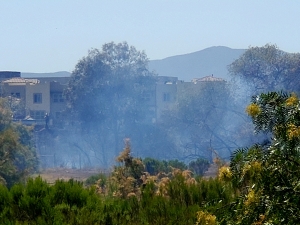 A second fire near the new Sharp Rees-Stealy Santee facility was also extinguished.  A third report of a fire was unfounded.

Matsushita said a total of eight fire trucks/units and a helicopter were used to knockdown the fires.