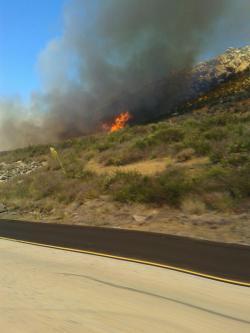 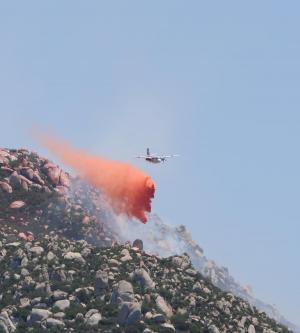 May 3, 2014 (San Diego’s East County) – Multiple fires along I-8 broke out this morning between East Willows Road and Japatul this morning, as ourViejasAlerts reported earlier.  The fires are believed to have been caused by a malfunctioning catalytic converter from a vehicle.

The largest forced closure of a viewpoint in Japatul and charred 12-14 acres. 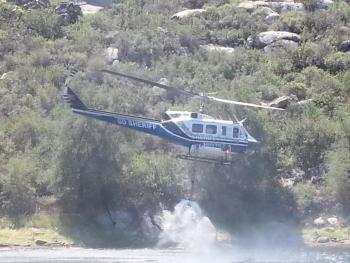 o structures were damaged however one firefighter reportedly suffered a minor injury.

"Thanks, SD Sheriff Department and those that worked so hard to acquire the two fire/rescue helicopters for San Diego!" Delia Cooley wrote in an e-mail to ECM, which included a photo of one of the choppers scooping up water at Palo Verde Lake.

Sign up to receive free Viejas Wildfire and Emergency Alerts via email at the top right side of our homepage and you can also receive a free weekly copy of East County Magazine. You can also follow ViejasAlerts on Twitter for brief alerts on your mobile phone. We recommend all of the above, since you don’t know what form of communications will work best in a major regional emergency.

was three starts, according to the Incident Commander, but has been knocked down already. This is the update on the Alert sent tonight
As per latest from actually our news partner Channel Ten
This sounds like arson to me . Love to SQUASH a FIREBUG! Sometimes it's a catalytic converter blowing apart but in this case the third fire in a row at the I-8 view point which is all asphalt pretty much makes it obvious. Hope I'm wrong.