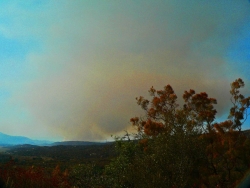 Update 9 p.m. Sept. 19 - The fire in southeast Riverside County has expanded to 348 acres, burned 12 structures including at least two homes, and vehicles. Evacuations of 500 homes have been ordered.  The Red Cross has opened evacuation centers at the Temecula Community Recreation Center, 30875 Rancho Vista Rd. and at Rancho California RV Resort in Aguanga.

The fire continues to burn several miles east of the Pechanga Indian reservation. More than 100 firefighters from multiple agencies are fighting the fire.  "This has the potential to become a major fire," Riverside Fire Captain Fernando Herrara said, the Los Angeles Times reports.  Road closures are in effect Hwy 79 from Jerry Hal Rd to Woodchuck Rd. and SR3 to Sundance Meadows. These closures will remain in effect throughout the night.  For details see CAL-FIRE'S incident report page at http://tcfireweb.co.riverside.ca.us/firepio/process?action=viewIncidentH....

September 19, 2009 – Two separate fires near Jamul and in Southeast Riverside County sent plumes of smoke billowing over much of East San Diego County this afternoon. Both fires are now contained, with firefighters remaining on the scene to douse hot spots from the 14-acre fire off Highway 94 and Millar Ranch Road near Jamul. One firefighter has been injured battling the East County blaze; no structures have been damaged.

A second fire is burning south of Vail Lake in the Cleveland National Forest in southeast Riverside County, scorching over 75 acres before firefighters contained the blaze, which is expected to be fully controlled this evening. The blaze closed a six-mile stretch of Route 79 in Temecula close to the San Diego County line, but the highway has since reopened. More than 300 firefighters from multiple agencies responded. Two firefighters have been injured, one requiring hospitalization.

Causes of both fires remain under investigation.