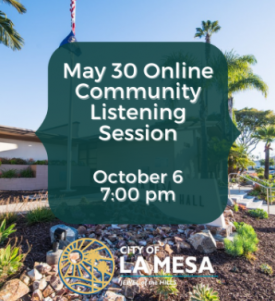 September 27, 2020 (La Mesa) – La Mesa residents are invited to participate in community listening session on Tuesday, October 6 at 7 p.m.  Hillard Heintze, the firm hired to conduct an independent investigation into the civil unrest and rioting that occurred on May 30 wants to hear your feedback and recommendations.

The meeting will be held online via Zoom due to COVID-19 restrictions on gatherings. Click here to register. If you have any questions, email Robert Boehmer at robert.boehmer@hillardheintze.com.

A protest over national and local police and racial justice issues was held on May 30, including protests over the killing of George Floyd by a Minnesota police officer and the La Mesa Police stop of Amaurie Johnson, a young black man  initially arrested for allegedly assaulting an officer who stopped him for smoking near a trolley stop. The charge was dropped after video failed to back claims of the officer, who has since left the department.  La Mesa's police chief also recently retired and a national search for a new chief is underway. 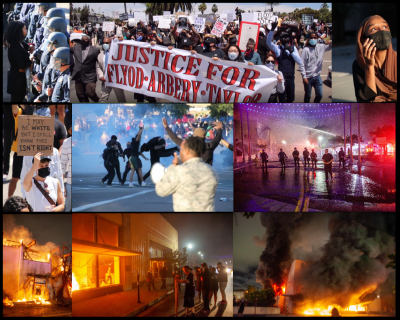 On May 30, protesters began and ended their march at the La Mesa Police Station. When protesters failed to disperse, reportedly after rocks and a burning Molotov cocktail were thrown at the station, the evening ended in a riot. Three buildings burned down in downtown La Mesa and dozens of buildings were looted. While several arrests have been made for looting and one individual was arrested for possession of bottle bomb materials, the arsonists remain at large.

Protesters criticized police for not meeting with protesters and dispatching tear gas and beanbag projectiles into the crowd, however many residents and business owners criticized the city for failing to protect properties. The only mutual aid on the night of May 30th came from the San Diego Sheriff's department. A late-night request for the National Guard was denied because the Guard was already deployed at civil unrest in Los Angeles. A records request by East County Magazine found no written record of any other mutual aid requests for that night, though other agencies were deployed on subsequent nights to help protect the city.

This after-action review is an assessment of the La Mesa Police Department’s overall planning efforts and operational responses, with a goal to provide recommendations for handling protest activities in the future. Your feedback will help the Hillard Team draft its recommendations to City Council.

The City of La Mesa has requested that Hillard Heintze reach out to the community but is not directly involved in this learning session. City Council members and staff will not be participating in this session. Residents who wish to share their thoughts are welcome.