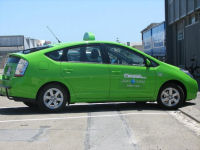 Program provides rebates and incentives for hybrid cabs
November 29, 2011(San Diego) -- The first “green” taxis at San Diego International Airport made their official debut Monday, Nov. 21, 2011, as part of an initiative to bring hybrid vehicles into the taxi fleet involving the San Diego County Regional Airport Authority, the California Center for Sustainable Energy (CCSE), Mossy Toyota and San Diego Metropolitan Transit System.
This public-private partnership has resulted in special incentives to help taxi operators overcome barriers to switching to cleaner, more fuel-efficient cabs, according to Heather Shepard, program manager for CCSE’s Airport Vehicle Rebate Program (AVRP). More than 30 hybrid vehicles are anticipated to be included at the launch of this program, including the first commercial use of the new Prius v in the nation. Shepard estimates that taxi operators switching to hybrid cabs will save $1,000 to $1,500 per month depending on miles driven.
CCSE and the Airport Authority teamed up last year to secure funding from the state’s Reformulated Gasoline Settlement Fund to set up the rebate program to offset the higher purchase costs of alternative-fueled vehicles. CCSE received $750,000 for rebates to ground transportation providers at the airport, including more than $200,000 earmarked for green cabs. Rebates are dependent on vehicle type, model year and fuel technology and range from $1,000 to $7,500. Eligible vehicles range from plug-in electric vehicles to
vehicles running on compressed natural gas.
“As the leading Toyota Prius dealer in San Diego County, we immediately saw value in this green program. It’s important to our employees, our customers and the future of San Diego,” said Jason Mossy, of Mossy Automotive. “That’s why it was a natural fit for us to partner with these forward thinking organizations.”
Among the green taxis coming to the airport this month are 30 new Toyota Prius v models. The Prius v (for versatility) debuted at the 2011 Detroit auto show and is currently coming onto the market for consumer sales. It is a five- passenger, four-door hatchback, with larger cargo and passenger spaces than current Prius models.
According to Shepard, the green taxis at the airport will serve as an important demonstration of San Diego’s clean-tech economy and commitment to clean transportation for tourists and residents alike.
“Once hybrid cab owners and drivers start reaping the fuel savings and communicate these benefits to other drivers, the transition to green cabs will accelerate,” Shepard said. “If all 300 cabs operating at the airport were operating hybrid taxis, they would be saving over $3 million per year in fuel costs as well as reducing carbon emissions and air pollution.”
For more information:
Calif. Energy Commission:  www.energy.ca.gov/contracts/PON-10-602/PON-10-
602_NOPA.pdf
Dept. of Energy:  http://energy.gov/articles/awards-advanced-vehicle- development