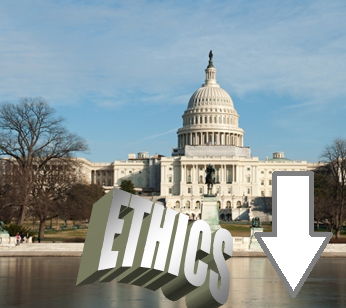 January 3, 2017 (Washington D.C) –The first action of the 115th Congress was a closed-door vote by House Republicans to gut the Office of Congressional Ethics’  (OCE) independence and oversight powers.  But hours later,  after media reported on the action and members received a flood of calls from angry constituents, a new vote was held to scrap that plan and keep the OCE intact, for now.

The OCE was created in 2008 by then-Speaker Nancy Pelosi, in response to the corruption scandal involving lobbyist Jack Abramoff, who was later convicted of multiple felonies.  The House Ethics Committee did nothing about that scandal. Nor did it take any action against Randy “Duke” Cunningham, a San Diego Congressman sentenced to a decade in prison for bribery and corruption charges. It also took no action against Congressman Bob Filner when he was charged with trespass after pushing past a TSA agent at an airport.

In light of the House Ethics Committee’s impotence, the OCE  was created to conduct independent investigations, including probes based on tips from staffers, the public and anonymous sources.

Since then, the OCE has conducted over 100 Congressional ethics investigations, passing about a third of those along to the House Ethics Committee.  Most recently, the OCE investigations have included a probe into San Diego Congressman Duncan D. Hunter’s campaign expenditures after media reports revealed large outlays for expensive jewelry,  a family vacation, video games and payments to his children’s private school, among other questionable expenses.  Hunter recently announced he had repaid $49,000 to his campaign. The San Diego Union-Tribune reports that Hunter voted for eliminate the OCE's oversight power, despite the apparent conflict of interest in voting to kill oversight by a committee investigating himself.

That dubious start to the new session drew strong criticism from Congressional watchdogs on both sides of the political aisle.

Nancy Pelosi, now House Minority Leader, blasted the move, stating, “Evidently, ethics are the first casualty of the new Republican  Congress.” She called the OCE “essential to an effective ethics process in the House, providing a vital element of transparency and accountable to the ethics process.”

Citizens for Responsibility and Ethics in Washington (CREW) which has filed ethical complaints recently against San Diego Rep. Darrell Issa,  has a record of investigating Congressional members’ ethical actions by both Republicans and Democrats.  CREW’s chairman Norman Eisen served as ethics lawyer for President Barack Obama and CREW’s vice chair Richard Painter served in that same role for President George W. B ush. In a joint statement, the pair said the House amendment would create a “serious risk” to the American people who expect representatives to meet legal and ethical obligations—and who rely on the OCE to provide “fair, nonpartisan investigations.”

Even President-Elect Donald Trump chided House leaders for the action,stating in a pair of tweet, “With all that Congress has to work on, do they really have to make the weakening of the Independent Ethics Watchdog as unfair as it may be, their number one act and priority. Focus on tax reform, healthcare and so many other things of far greater importance!” He added the hashtag #DTS meaning drain the swamp.

The amendment’s author,  Virginia Rep. Bob Goodlatte, defended his amendment , claiming the OCE needs oversight by Congress and contending that some members had complained about due process  if a complaint was made public without a finding of wrongdoing.

But the American public came clearly down on the side of oversight, not weakening ethics investigators’ abilities, and a public backlash swiftly followed the closed-door vote.

Google searches for ‘who is my representative’ spiked after the vote to gut ethics, with House Republican members’ offices soon swamped by calls and emails from outraged constituents.

House Speaker Paul Ryan reportedly urged that the action be put on ice.  Within hours, a new vote by House Republicans did just that.

The move shows that despite Republicans now having control of both houses of Congress and the Presidency, the will of the people still matters.

Some House insiders warn that efforts to weaken the Office of Congressional Ethics will likely resurface in the future.  But for now,  whistleblowers, the public, and Congressional staffers are free to bring complaints to the OCE, which remains empowered to conduct bipartisan investigations independent of oversight by the partisan House Ethics Committee.