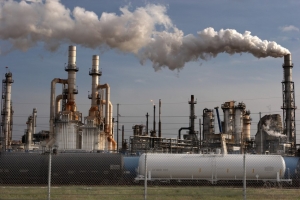 The bill originally required oil companies to file reports on scheduled shutdowns of refineries for maintenance. But now amendments backed by oil companies and labor give power to the oil companies to withhold information from the public and to sue those who seek public records.

“SB 1300 allows refinery owners to designated virtually any information at all as a `trade secret’ regardless of whether it qualifies legally as a trade secret,” Huffington Post reports. The bill goes further, giving an oil refinery owner the right to file a lawsuit against a member of the public to block disclosure, forcing activists or citizens to hire lawyers and defend their public records request in court.  Moreover if you lose, you will have to pay the oil company’s legal bills.

The bill sets a dangerous precedent that could prevent citizens from getting vital information on matters such as toxic pollutants in their water, soil or air from a refinery in their community.

Morover, it could be used as a model to exclude other industries and special interests from public disclosure and have a chilling effect on the rights of citizens and media to access public records without fear of retribution.

The measure subverts the intent of the Ralph M. Brown Act, California’s public records statute and could even preclude information on matters such as state oversight of worker safety at refineries.

To see how your legislators voted on SB 1300, click here: http://leginfo.legislature.ca.gov/faces/billAnalysisClient.xhtml