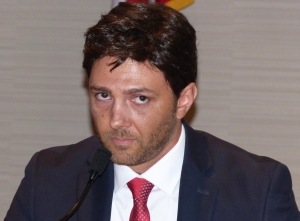 “His behavior is extraordinarily irresponsible. A public official should not be in the business of threatening groundless litigation over acts that are things that reporters do every day.”  -- David Snyder, executive director, First Amendment Coalition

The Councilman also demanded that McDonald stop contacting Kalasho or his wife “by any means” including his official public email address. He added, “Any further attempts to contact me or my wife or Members, Sponsors of affiliates of my Chamber by any means will be used against you in the upcoming harassment claim” and further accused the reporter of “acts of deception” and fabricating information.

Kalasho’s wife became president of the San Diego Chaldean-American Chamber of Commerce after Kalasho was elected to the Council.  The UT inquiry included questions regarding Kalasho’s vote on tax liens against residents over unpaid Waste Management bills. Waste Management paid $2,500 to the Chamber as a corporate member, and it is unclear why Kalasho did not recuse himself from the vote, as Council members are required to do whenever they have a financial conflict involving money paid to themselves or their family members.

The Attorney General has also sent Kalasho a letter probing the lack of nonprofit papers filed for the Miss Middle East Beauty Pageant he has run, after ECM raised questions with state regulators over the pageant's questionable nonprofit status, as we  reported.

The emails released by McDonald from himself to Kalasho were professional in tone, even after Kalasho’s insults and dodging important questions on matters of strong public interest.

McDonald has published a series of reports on Kalasho’s controversies. But after McDonald published that Waste Management withdrew its sponsorship of his Chamber, Kalasho accused McDonald of making up the story. However Waste Management senior communications manager Eloise Orozco confirmed to East County Magazine reporter Paul Kruze that Waste Management had withdrawn its support because “we’re not entirely comfortable contributing to an organization which is involved in a controversy.”

Kalasho’s Chamber has been embroiled in several controversies.  After losing a trademark dispute over the name and being ordered by the U.S. Patent and Trademark Office to cease using it, Kalasho took down the Chamber site and announced he has formed a new group called the Middle Eastern Chamber of Commerce.

The earlier Chamber ran the Miss Middle East Beauty Pageant.  Multiple contestants have recently filed suit with allegations that include fraud, photoshopping a dethroned beauty queen’s face onto someone else’s nude body, and sexual harassment including offering to trade sex for the crown. Kalasho has denied those charges and has filed a countersuit.

Union Tribune editorial and opinion editor Matthew Hall also exchanged emails with Kalasho in preparation for an editorial that the newspaper subsequently ran.  Kalasho continued his name-calling, and told Hall, “I don’t do interviews with the UT.”

Kalasho has also recently declined to respond to calls or emails from East County Magazine requesting comments for recent stories including this one. We sent a list of questions to Kalasho at both his official city email address and his personal email address, allowing 24 hours for a response before publishing this article, but he did not respond.

The Union-Tribune editorial board defended its reporter and excoriated Kalasho, stating, “Declining comment in politics is one thing, but dripping contempt is something else. Kalasho should dial it back. El Cajon’s constituents are poorly served by his lack of professionalism.”

East County Magazine sent copies of the emails between Kalasho and the Union-Tribune’s reporter and editor to two First Amendment experts for comments.

Terry Francke is general counsel for Californians Aware (CALAWARE), an organization which protects open government access in California by reporters and the public.

Regarding Kalasho’s threat to sue McDonald or the Union-Tribune, Francke said he sees no significant likelihood that such a suit could possibly prevail. “He admits that he could not succeed with a libel suit because he could not prove deliberate lies,” he said, citing the standard for public figures to win a libel case. “As for harassment, I’m not aware of any case in which a court equated persistent, even obnoxious interview attempts by a journalist to be actionable.”

Francke further affirmed that a City Councilman has no legal right to demand that a reporter not contact him. Moreover, he said reporters have no obligation to heed Kalasho’s demand not to contact Kalasho, his wife, Chamber officers or members. Francke added that he doubts Kalasho’s actions would have a chilling effect on media because “no journalist worth his/her salt would be intimidated by such behavior.”

He also had a warning for Kalasho. “Anyone concerned about this should be aware that a legal action based on these circumstances would almost certainly be tossed out as a SLAPP suit which would mean the plaintiff would not only lose on the merits but would have to pay the attorney fees of the defendant.”

SLAPP stands for Strategic Lawsuit Against Public Participation.  A SLAPP suit aims to suppress free speech rights under the First Amendment of the U.S. Constitution and the California Constitution. SLAPP suits are illegal in California. “SLAPPs are often brought by corporations, real estate developers, or government officials and entities against individuals or organizations who oppose them on public issues,” the California anti-SLAPP project website states.

East County Magazine also spoke with David Snyder, executive director of the First Amendment Coalition, regarding Kalasho’s actions.  After reviewing the email exchanges published by the Union-Tribune, Snyder told ECM. “First and foremost, it’s a really depressing commentary on the level of discourse regarding, and with, the press that seems to have taken hold not just here, but across the country,” an apparent reference to claims of “fake news” by President Donald Trump and others attempting to discredit media for even truthful and well-documented reporting.

As for Kalasho’s remarks, Snyder stated, “That an elected official would engage in such name-calling is disturbing. The threats of litigation are also disturbing.”

Snyder added, “His behavior is extraordinarily irresponsible. A public official should not be in the business of threatening groundless litigation over acts that are things that reporters do every day.”  He said that “constant threats of baseless lawsuits can cast a real chill on the ability of reporters to just do their jobs” and make it harder for reporters to hold public officials accountable for their actions.

The First Amendment does not provide a blanket shield against otherwise unlawful behavior such as assault or invading privacy of someone’s home, he clarified.  But he made clear, “Just engaging in normal news gathering is not a crime and would be protected” by the First Amendment.  “I can’t imagine that any court would decide that sending emails and making phone calls asking about the government business of a public official could in any way rise to the level of an actionable claim.”

He said it’s not unlawful or unreasonable for a reporter to call a public official at home regarding a news story.

As for Kalasho’s demands not to contact himself, his wife or Chamber members, Snyder stated, “To the extent his email is some kind of order to not contact people, that order is not enforceable. To prevent a reporter from making a phone call would be prior restraint—preventing speech before it happens, which is verboten (forbidden).”

According to Cornell Law, government action to prevent free speech is “generally unconstitutional.” The First Amendment Center’s website states, “Perhaps no First Amendment right is more secure than the news media’s right to publish information free from government censorship. While public officials frequently wish they could prevent newspapers, magazines and broadcast stations from publishing sensitive or embarrassing information, their ability to censor the media is extremely limited.”

According to the Reporters Committee for Freedom of the press, citing the First Amendment Handbook, “A prior restraint is an official government restriction of speech prior to publication. Prior restraints are viewed by the U.S. Supreme Court as “the most serious and the least tolerable infringement on First Amendment rights.” The Court repeatedly has found that such attempts to censor the media are presumed unconstitutional.”

Snyder agreed with Francke regarding Kalasho’s threats to sue the Union-Tribune, based on what he could observe in the emails disclosed.  Snyder said that if Kalasho filed a suit based on normal news gathering activities, the chances of it being thrown out and of Kalasho facing an anti-SLAPP suit would be “very, very high.”  He added, “It would be subject to California’s anti-SLAPP law, which requires the losing party, the person whose lawsuit is dismissed to pay the lawyer’s fee for the defendant—in this case, the Union-Tribune.”

Kalasho has claimed the Union-Tribune was one-sided, yet he has refused to answer important questions, as the email chains reveal. Reporters are not mind readers.  The Union-Tribune reporter and editor gave Kalasho opportunities to share his perspectives, and he chose not to do so.  While Kalasho has claimed some information he provided previously was omitted, he has not provided any evidence to the Union-Tribune’s editor to document that – instead attacking the press instead of taking responsibility for his own failure to respond to reasonable inquiries sent by the media.

Snyder noted that Kalasho has a right to express his views and that if he believes a report is inaccurate, he should raise his concerns to the reporter. If that does not resolve the concerns, he should talk to the editor.

“Based on what I saw, that doesn’t seem to be what he’s doing,” the First Amendment Coalition leader concluded of Kalasho’s actions. “The claims of unfair coverage seem to be a front to engage in name calling-- and avoid answering questions.”

Can't believe I voted for this idiot. TIME FOR A CHANGE; yeah, time for this guy to resign!

this guy is a bully
such types regardless of party , philosophy, etc do not belong in elected or appointed office