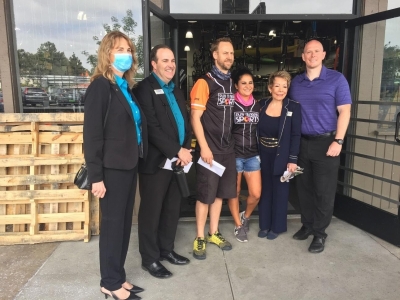 July 1, 2020 (La Mesa) – Relief checks of $5,000 each from the La Mesa Disaster Recovery Fund were distributed to 27 business owners on Tuesday, in the first of two rounds of funding.

Over 2,200 donors have contributed more than $250,000. That includes over $202,000 raised through a GoFundMe account that is still accepting donations. Another $50,000 was donated directly by large organizations including California Coast Credit Union, EDCO, SDG&E, Penske and Sycuan.

At least 50 businesses suffered physical damage or looting.  Any business that sustained damage can still apply for help by completing this registration form before July 24. All remaining funds wil be given out the week of July 27, after which the fund will be closed.

East County Chamber Foundation Board Chairman Patrick Howard says the group remained focused from the start on a single priority. “We worked thoughtfully to make the process as easy and as fast as possible. We were overwhelmed by the support for these La Mesa business owners. We made a promise to be fast, fair, and equitable, and we have delivered thanks to an exceptional East County partnership.”

Some donations were mailed, while others were hand-delivered, including donations to Postal Annex 29, Albert’s Mexican Food, Menchie’s Frozen Yogurt, and Play It Again Sports. 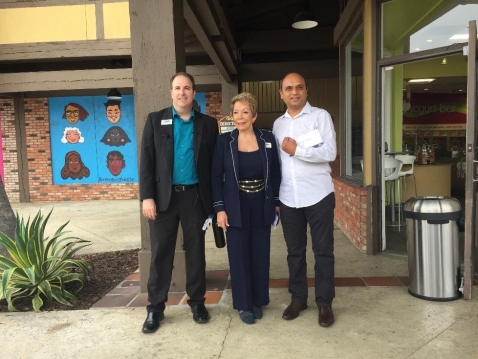 Photo, right: Rick Wilson, East County Chamber, and Mary England, La Mesa Chamber, presented a check to Chaitu Patel at Menchie’s Frozen Yogurt.
One of the hardest hit businesses is Play It Again Sports in the La Mesa Springs shopping center. The sports equipment reseller suffered smoke and fire damage as well as losses from looting.
On June 16, Lake Murray Fireworks announced that following cancellation of the annual fireworks display due to COVID-19, major sponsor Hanken Cono Assad & Co. asked to have their donation forwarded instead to help a La Mesa business in need. The organization chose Play It Again Sports.
Then on  June 27, Amber Welch and the La Mesa Little League held a separate donation drive for Play It Again Sports, which is also seeking donations of used sporting goods equipment to sell.
Play It Again Sam is still closed, but hopes to reopen soon. “We are so grateful for your support,” the La Mesa retailer posted on Facebook, “and we can’t wait to be back to serving the Our community.”