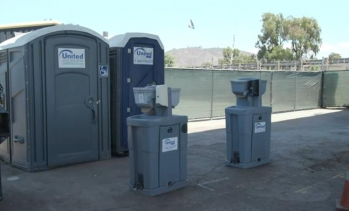 August 5, 2022 (San Diego) – On August 10, East County’s first safe parking site for people living in their vehicles will be open beneath a freeway overpass on Magnolia in unincorporated El Cajon. The county-run safe parking area will be on the same site where homeless people have camped out for years.

The large former encampment has been cleared away, after complaints over sanitation issues and other concerns. But now, thanks to outreach lead by the County’s Department of Homeless Solutions and Equitable Communities, and in collaboration with multiple county departments as well as oganizations such as Alpha Project and Crisis House, the site is being transformed.

In addition to safe parking, the area will offer supportive services, porta-potties and hand-washing stations.

According to a video released by the county, people living in vehicles are typically homeless for the first time. The goal is to help them go from cars into housing, without winding up on the streets.

This model has been so successful elsewhere that the wait list for safe parking sites is typically 50 households on any given night.

People who were at the former tent camp were all provided with information on where to find shelter and services, County News Service reports.

The county views the new safe parking site as a compassionate solution.

ECM reached out to El Cajon City Manager Graham Mitchell, who helped lead efforts to persuade the county to clear the former tent camp. Though the site was on county land just outside of the city of El Cajon’s borders, problems such as shoplifting by certain camp residents had plagued merchants in El Cajon.

“For years, the City of El Cajon ahs been asking the County to be part of the solution towards ending homeless in East County,” Mitchell told East County Magazine. Though the city has not taken a formal position on the safe parking site, Mitchell said, “This is the County’s first significant effort, so personally, I am pleased.”

The City Manager adds, “I have spoken with County staff about the safe parking lot and I have met with the operators of the lot.  As long as it operates as it does in other parts of the County, I do not think the City has reason to be concerned.”