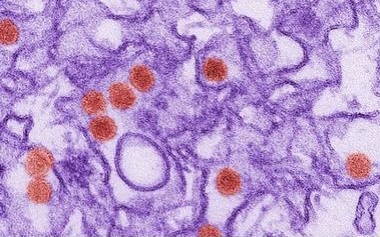 March 25, 2016 (San Diego) -- The first Zika virus case acquired through sexual transmission in San Diego was confirmed this week by the Centers for Disease Control and Prevention (CDC), the County of San Diego Health and Human Services Agency announced today.

The woman was infected with the virus in February after intimate contact with an ill man who returned from a trip to Colombia. The woman was not pregnant and had not traveled out of the country. She and her partner have fully recovered.

“Travelers to countries where Zika is present should protect themselves from mosquito bites while they are abroad and prevent sexual transmission when they return,” said Wilma Wooten, M.D., M.P.H., County public health officer. “Next to abstinence, condoms are the best prevention method against any sexually transmitted infections.”

The Zika virus is transmitted mostly through mosquito bites, but a man who has Zika can transmit the virus to his sex partners. Men who travel from Zika-affected countries should protect their partners, especially women who are pregnant or trying to become pregnant, by following CDC guidelines.

Only one out of every five people who gets infected with the Zika virus ever experiences any illness. If people do get sick, their symptoms are usually mild and may include fever, rash, joint pain or conjunctivitis (red eyes). However, the Zika virus is suspected of causing a severe birth defect — microcephaly, a condition where babies heads and brains are smaller than normal — in cases in which mothers were infected during pregnancy.

According to the CDC, no mosquito-transmitted cases of Zika have been reported in the continental United States. Forty countries and territories in the Americas, Africa and the Pacific Ocean have recently reported locally acquired Zika infections.  Although Mexico has reported cases from local mosquitoes, none have been in Baja California.  An up-to-date list of Zika-affected countries can be found on the CDC Zika virus Web page.

The CDC has issued traveler’s warnings urging pregnant women not to travel to countries where Zika is present. HHSA advises people with symptoms to see a healthcare provider if they have visited an area where Zika virus is present or had sexual contact with a person who traveled to a Zika-affected area. No specific medications are available to treat the Zika virus, and there is no vaccine.

The mosquitoes known to transmit the Zika virus, primarily the Aedes aegypti (yellow fever mosquito), but also the Aedes albopictus (Asian tiger mosquito), are not native to San Diego. However, small numbers of these mosquitoes have been discovered in the county in recent years.

These invasive Aedes mosquitoes are different from the mosquito species native to San Diego County. They are black and have distinctive white stripes. And unlike the native mosquitoes, they like to feed during daylight hours and are known to be aggressive biters.

The San Diego County Department of Environmental Health Vector Control Program has been encouraging residents to protect themselves from mosquitoes since 2003, when another virus — the West Nile virus — showed up in California. The invasive mosquitoes that can transmit the Zika virus like to live and breed in urbanized areas — including inside homes and backyards — and can breed in containers as small as a thimble. The Vector Control Program routinely monitors and works to control mosquito populations, responds to complaints, and reduces or treats mosquito breeding sources.

Prevent mosquito breeding sites. Every week, dump out and clean containers that hold water inside and outside homes. Fill plant saucers with sand or fine gravel so water won’t form pools where mosquitoes can breed.

For more information about the Zika virus, go to the County Zika virus Web page.