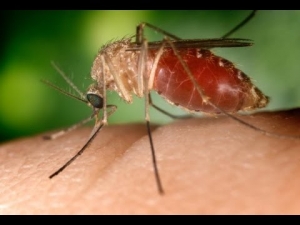 October 6, 2017 (San Diego) - A 49-year-old woman from Spring Valley has been confirmed as the first person in San Diego County in 2017 to test positive for West Nile virus, County Health and Human Services Agency announced Friday.

The woman became ill with a headache and rash on the fourth day of a trip outside the country. Because illness can occur between two and 14 days after being bitten by a mosquito, it is not clear whether the woman became infected with West Nile virus locally. The woman was not hospitalized and has fully recovered.

The news prompted County officials to remind people to remember to protect themselves from mosquitoes that can transmit West Nile virus and other diseases.

West Nile virus is mainly a bird disease but can be transmitted to people by native San Diego County mosquitoes that first feed on an infected bird or animal and then a bite a person.

The vast majority of people who become infected with West Nile virus never know it and never suffer any symptoms. About two out of every 10 people who get infected suffer mild symptoms including headache, fever, nausea, fatigue, skin rash or swollen glands. But in rare cases, West Nile virus can make people extremely ill and even kill them.

Although the Spring Valley woman is the first person in San Diego County to test positive for West Nile virus this year, the virus has been present in the local environment.

County public and environmental health officials said the best way for people to protect themselves against the virus was to follow the County’s Prevent, Protect, Report guidelines. These guidelines can also help county residents protect themselves from invasive Aedes mosquitoes that can transmit tropical diseases, including Zika, dengue and chikungunya, if they first bite an infected person and then feed on people.