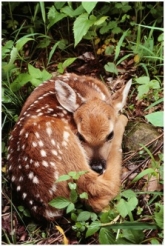 April 16, 2011 (San Diego’s East County) -- California Department of Fish and Game (DFG) wants to remind people not to handle young wild animals. The improper handling of young wildlife is a problem in California and across the nation, most commonly in the spring, when many species are caring for their offspring.

People often encounter young wild animals that they believe need help or have been orphaned. However, in most cases neither assumption is true. In 2009, 537 fawns were turned into California rehabilitation facilities by well-meaning members of the public. Many were healthy and should not have been disturbed, since this can cause the animal lto lose its ability to survive in the wild.

“Don't pick up a healthy fawn and become what wildlife experts refer to as a "fawn-napper,” said Nicole Carion, DFG’s statewide coordinator for wildlife rehabilitation and restricted species. “If you see a fawn by itself, leave the area and do not attract attention to it. Its mother will not return if you are close by."

Once a fawn is removed from its mother, it can lose its ability to survive in the wild. The same danger applies to most animals, including bears, coyotes, raccoons and most birds.

Disease is another reason that wild animals should not be handled. Wild animals can transmit diseases that can be contracted by humans, including rabies and tularemia, and also carry ticks, fleas and lice.

The responsibility for intervention should be left to DFG personnel or permitted wildlife rehabilitators. It is illegal to keep orphaned or injured animals for more than 48 hours in California. People can call a rehabilitator, who will determine whether there is a need for a rescue.

Rehabilitators are trained to provide care for wild animals so they retain their natural fear of humans and do not become habituated or imprinted. For more information on wildlife rehabilitation, visit www.dfg.ca.gov/wildlife/rehab/facilities.html.

DFG advises the public to remember that wildlife belongs in the wild. As wildlife experts say: “If you care, leave them there.”