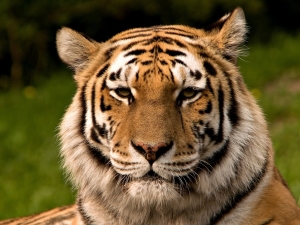 “We took the report very seriously,” says media specialist Peter Tira. “We believe it is a hoax.”

“We started an investigation and we sent six wildlife officials out there,” said Tira, adding that the U.S. Fish and Wildlife Service also sent a trapper out.  “There is no evidence of a tiger. We checked the area thoroughly,” he says, adding that the agency spent considerable resources.

Learning of a faked photo published in Tecate that purported to show a tiger crossing the border may have fueled false or mistaken reports, he suggested. “There is no credibility to it.” The same photo had previously been published in India in February, as ECM reported shortly after reports of a possible tiger in East County surfaced.

We asked Foy if he was aware of a video by Dennis Richardson of Brush Fire Partyline yesterday, in which he interviewed Boulevard resident David Mora, who lives on Jewel Valley Road.  Mora claimed that a friend of his mother texted her that he’d seen a tiger near Benny’s garage in Boulevard. He had not seen the video.

We also asked if he’d seen a post on a Campo-Lake Morena forum from a woman who wrote that she had large paw print tracks on her property that she believed were too large for a cougar. He had not seen the post and was not aware of any possible tiger tracks found in the area.

But he made clear, “We have concluded our investigation. We are not going to spend any more time on this,” he added, but clarified that if someone were to produce “real evidence” such as a photo with geotag they would look into the matter.

Captain Foy said the agency has expended resources on at least two prior reports of dangerous wildlife that proved to be false, a “fake alligator” sighting in Sacramento and a “bogus bear attack” in Los Angeles County. Each of these pulled officers away from other important duties, he stated.

What's lurking in the wilderness. A common Cougar (Puma concolor) aka; Mountain Lion, Panther or Catamount can kill a human easily - there have been many documented attacks over the years, with some fatalities. There's also Jaguar (Panthera onca) roaming the Southwest, to Mexico and beyond. Be aware of your surroundings, and be prepared for the unknown. After all, we do live on their former territory.
One thing is certain, if the Border Patrol put the tiger in a cage there would be an up'roar'!