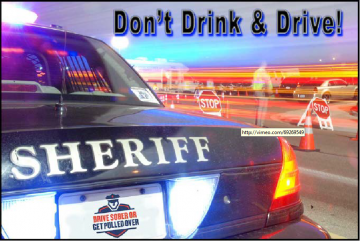 May 6, 2018 (Santee) – A sobriety and driver license checkpoint conducted by Sheriff’s deputies in Santee last night near Mission Gorge Road and State Route 125 resulted in five DUI (driving under the influence arrests). In addition, six citations were issued for suspended/revoked or no driver’s licenses and eight vehicles were impounded.

A total of 985 vehicles were stopped and 32 were directed into secondary inspection. Field sobriety tests were administered to eight drivers. Of the five drivers arrested, four were found to have excessive levels of alcohol and one was arrested for drugs.

The purpose of the checkpoint and saturation was to remove impaired and/or unlicensed drivers from the roadway, public education and deterrence thereby increasing the safety of all drivers and allowing for a safer driving environment, says Sgt. Joe Passalacqua.

Funding for this operation was provided by a grant from the California Office of Traffic Safety, through the National Highway Traffic Safety Administration.

Driving while under the influence of alcohol, illegal drugs, recreational marijuana, even prescription drugs and methadone can be problematic, yet many people continue to do it for whatever reasons they have. Most probably have no real idea how their driving skills are affected, or simply don't care. I wonder if they figure it out after they cause a wreck and injure or kill an innocent person, then serve years locked up in prison.