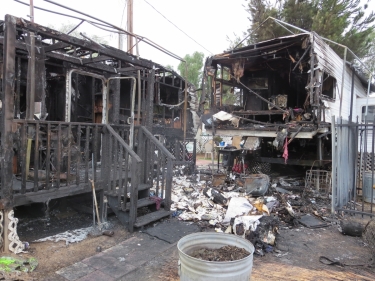 East County News Service
Photos by Robert Gehr
August 2, 2019 (El Cajon) – Four adults and a child are being assisted by the Red Cross after a fire this afternoon destroyed two travel trailers in El Cajon.
Heartland Fire & Rescue crews from El Cajon and La Mesa responded to the blaze reported at 3:45 p.m. at 213 El Cajon Blvd.  Firefighters arrived within five minutes to find two trailers in the Eastern Trailer Park.
Firefighters quickly attacked the fire, confining it from spreading to other trailers nearby, says Sonny Saghera, spokesman for Heartland Fire.  The occupants were not at home when the fire started.  Crews knocked down the blaze within 10 minutes. 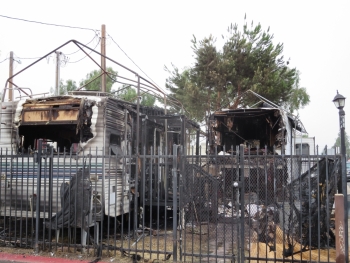 A police officer suffered a minor injury to his hand from breaking glass to find out if anyone was inside the trailers. He was evaluated and released at the scene.
Cause of the fire is under investigation.
Damages to the structures and contents of both homes are estimated at $35,000.