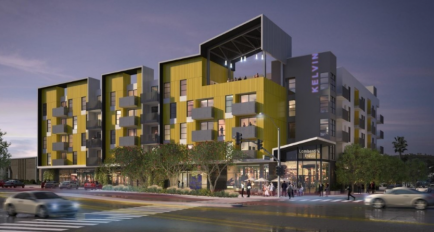 May 20, 2020 (Lemon Grove) — By a 3-2 vote, Lemon Grove’s City Council on Tuesday denied an appeal of the planning commission’s approval of a five-story mixed-use development, with three retail spaces at the street level. The project at 7946 Broadway is slated to be built on property occupied by Berry’s Athletic Supply, a longtime business no longer in operation; the structure is set for demolition.

The appeal was made by a local resident who voiced concerns over potential increase in traffic and removal of the two large Ficus trees on the property. The resident also suggested that CityMark, the developer, should create a 3-D model for residents to see the impact of the structure.

Public comments regarding the appeal were numerous. Six residents and the property manager of the Celsius property at 100 Citronica Lane, also developed by CityMark, all voiced support for the project as a step towards revitalizing Lemon Grove and providing quality housing to entice new residents. Other residents endorsed the project for bringing new business and housing to locals. Noah Harris of the Climate Action Campaign supported the plan, stating, “We applaud the city in taking on the housing and climate crisis.”

Councilmember Jerry Jones raised concerns over the eroding square footage of retail space in the downtown area, referencing the 35 percent reduction in square footage compared to the present retail space of Berry’s. Councilmember David Arambula understood Jones’ points but stated that the project was in the “right place” at the “right time” and would help in providing housing to residents.

Because the Planning Commission had already approved the permit application in a 3-2 vote, the City Council was only able to vote on the appeal.  Councilmembers Arambula, Mendoza, and Mayor Vasquez voted to deny the appeal. allowing the project to proceed. Councilmembers Jones and Altamirano voted against denying the appeal.

In other business, the Council unanimously passed continuation of a public hearing to consider the amendment of the city’s master fee see Schedule for fiscal year 2021-22 to be addressed at the June 2nd meeting.

The Council unanimously passed a funding request for an emergency storm drain Repair Project at 6671 Broadway to fix a collapsed underground storm drain resulting in a sinkhole.

Councilmembers also approved 5-0 to apply for funds from the Community Development Block Grant, to be used in coronavirus relief.

Lemon Grove initiated its drive-through food distribution last Saturday (5/16) and provided over 175 families with food. This program will continue until funds have run out. More information regarding the Coronavirus can be found on the city’s website.

The last item on the agenda proposed a reduction in the annual 5.75% rate increase on the sewer system charge. Staff recommended the Council lower the rate to 2.875% in following what has been done over the past three years. Councilmember Mendoza raised the possibility of decreasing the rate to 0%. Councilmember Jones disagreed with the proposal as a political action instead of a business action and noted that a 2.875% increase would be the smart financial decision for the city.

The vote to reduce the proposed rate to 2.875% passed 4-1, with Councilmember Altamirano opposed.

Public comments to the Council on non-agenda items focused on the Council’s recent denial of a proposed marijuana dispensary. Four residents thanked the Council for its decision to deny the proposal, citing safety concerns of the area surrounding the store as well as negative health effects of marijuana. Jeanette Ellis raised concerns over the safety of the dirt parking lot on the West side of Berry Street Park. Ellis noted that the lack of painted lines on the lot has led to parked cars impeding the walking path of residents, thus putting pedestrians in danger.

My complaints about the reduced retail space should not be minimized. This is a 35% reduction in floor space not a "slight reduction"! Also consider that 25% of the store frontage on the main street, Broadway, is dedicated to the developer and his tenants. This is a pattern that cannot continue or we will destroy our business community. Add to that the fact that the applicant asked the city for 13 deviations from code for things from trees to parking space sizes to encroachment into the right-of-way. And then there is the parking consideration. We may want to look at the world though rose colored glasses but when you approve a project with 77 parking spaces for 66 units and you just hope that the residents limit themselves to just one car you are imposing on the community in ways that no elected official should have the right to do. With a public parking lot meant for businesses on Broadway just one door away, this council majority just gave away those parking spaces to one developer for their private use. Businesses in the area and the public should be outraged. This type of consideration will never be available to future developers.Yes we need housing and we need transit oriented housing but we have to be honest with ourselves about what will work, what fits and what is real benefit to the community before we grant this kind of forced development on our little town. Remember that at November's election Lemon Grove. Two of the three that approved this debacle are up for election. Either maker a change or expect more of the same.