Photos of anniversary event by Pam Wilmers and Miriam Raftery

October 27, 2013 (Lakeside) – “It started as a single flame in rugged, remote backcountry…The perfect alignment of extreme weather, fire weather and circumstances quickly transformed that flame into an enormously powerful and unstoppable force known as the Cedar Fire,” Lakeside firefighter Chuck Palmore said at yesterday’s 10-year anniversary of the Cedar Fire commemoration at the Lakeside Fire Station.  The Cedar Fire touched the lives of thousands of people, he noted. “A decade later, we gather together here today to reflect and reconnect, to share with each other our journey that has taken us from victim to survivor to thriver.”

The Cedar Fire remains the worst wildfire in California's history in size (280,278 acres, or 438 square miles), buildings destroyed (2,820, including over 2,200 homes), and people killed(15). Of those who lost homes, most have rebuilt or moved on.  But for the families of those who perished, the scars will forever remain.

Molly Sloan lost her daughter, a granddaughter, and her daughter-in-law.  She and other family members came to this memorial service to display a photo montage in tribute to their loved ones’ memories. 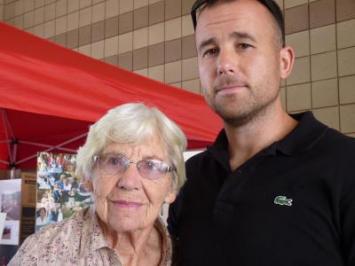 “The smoke was so thick, I couldn’t see anything in front of me,” said Sloan, who drove through 30-foot-tall flames to escape the fire in Lakeside’s Wildcat Canyon at three o-clock in the morning.  Other family members at home were supposed to following in their own cars, but didn’t.

“They thought she was driving to her death,” Sloan’s grandson, Dante Perry III, told ECM.  “So they tried to wait it out.”   Mary Peace, Robin Sloan and her daughter, Jennifer Sloan, an El Capitan High School student, never made it out.

“I don’t know how I got out, and they didn’t,” Molly Sloan said, her voice catching. (photo, right: Molly Sloan and Dante Perry III)

The family never rebuilt.  Molly owned the property and had given homes to each of her children, but was too traumatized to return.  “We’ve let it go back to nature,” she said.

Perry says he hopes to rebuild on the site someday.  “I lived up there ‘til I was 16…I love it up there.  It’s beautiful—if you can get past what happened.”

Asked how her f 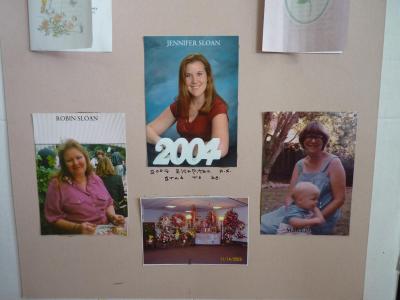 amily is faring today, Molly tilts her chin up. “We’re actually doing very well now,” she replied, though she disclosed that Mary’s two children lost their father to cancer in July. Becky is going to college in Oregon and plans to become a registered nurse; Charlie is in Washington working in the lumber industry.  “He has a nice family—two little boys. One just lost his first tooth,” Molly said, smiling.

The nightmare began when a lost and dehydrated hunter lit a signal fire to attract rescuers near Boulder Creek. He was saved, but Santa Ana winds swiftly fueled the flames in the remote location into a firestorm that reached Ramona and Lakeside in the dead of night, catching many unaware before continuing its deadly swath across the county.

Lakeside Fire Chief Andy Parr vividly recalls those turbulent times.  Memories of the fire “are like a slide tray in your head that shows images,” said Parr, who worked “shoulder to shoulder to keep our community safe.”  He voiced “pride and appreciation” for firefighters who worked valiantly to alert residents, saving many, as well as battling an inferno that spread faster than any wildfire on record.

Out of the ashes of the fire, Lakeside built a new fire station that will be able to continue operations for at least three days without replenishing supplies, said Parr.

David Kassel, founder of the  Cedar Fire Rebuilding Resource Group, thanked all who helped those who lost every 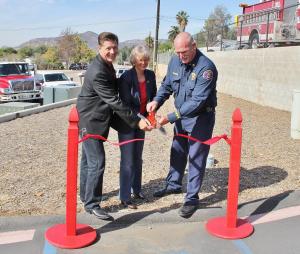 “The fire made paupers out of many of us, but there were those who reached out to help to give us more than a hand up.…We used to say this is the most expensive and exclusive group you never wanted to belong to,” he added ironically.  “These people provided a way for us to move past the smoke, tears and devastation and rebuild our lives.”

He also asked for donations to help create a Cedar Fire Memorial in Lakeside that will honor the memories of those who perished.  A ribbon cutting for the memorial was held during the event. 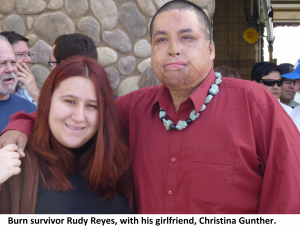 Rudy Reyes, the worst burned victim of the Cedar Fire, was charred over 65 percent of his body.

“I cried,” he said after the ceremony, but was dismayed that no burn victims or others who lost family members were included among the speakers.  Reyes has championed causes to help other burn survivors and has become an outspoken advocate for improving fire prevention since the ordeal, running unsuccessfully twice for Supervisor.

Assemblyman Brian Jones was a newly elected Santee Councilman when the Cedar Fire occurred.  He described the scenes as “a war zone”, recalling his shock to see homes burning all around and deer leaping in front of his vehicle to flee the flames. 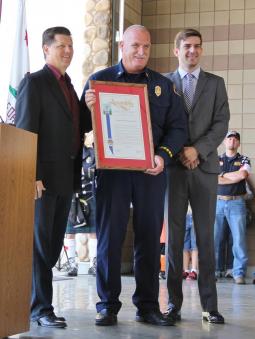 Jones, along with a representative from State Senator Joel Anderson’s office, presented a resolution from the State Legislature to commemorate Lakeside Fire Department’s 50th anniversary, which coincides with the Cedar Fire ten year anniversary.

Many speakers praised the heroism of firefighters and other emergency responders, including Steven Rucker, a firefighter from out of the area who lost his life fighting to save a home near Santa Ysabel.

“What starts in our backcountry does not stay in our backcountry,” Supervisor Dianne Jacob said, noting that the Cedar Fire was the first to burn into urban areas in San Diego.  Since then, the County has spent $286 million to improve communications and boost resources, she pointed out.  The County created a phone system for emergency notifications, added 70 fire engines and two firefighting helicopters, as well as creating a County Fire authority to consolidate rural fire departments.

Despite recent news of closed stations, Jacob stated, “We are ensuring round the clock fire and emergency services in some 54 fire stations.”  At a similar appearance in Scripps Ranch, Jacob told ECM that keeping stations open 24 hours a day, seven days a week, 365 days a year is her goal. “More improvements are coming,” she said, citing the County’s five-year master plan for its County Fire Authority.

“The story of the Cedar Fire and its aftermath is also about resiliency,” said Jacob, who recalled telling the people of her district after the firestorm, “We will recover. We will rise from the ashes and we will be better and stronger than ever before, because that’s 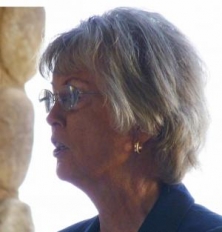 what East County is all about –and we did.”

The fire brought communities together, with neighbors who never knew each other pitching in to help those in need, she recalled, citing Harbison canyon as an example of an area that was almost totally wiped out, but has largely rebuilt.

“While the scars from this disaster are no longer fresh, they are still with us,” she said, adding that survivors and all who suffered losses “will never forget.”

A bagpiper played a mournful song to commemmorate those who perished in the firestorm.

The chaplain for the Lakeside Fire Department offered up a prayer for the 15 people who did not survive the Cedar Fire--12 of them in Lakeside. 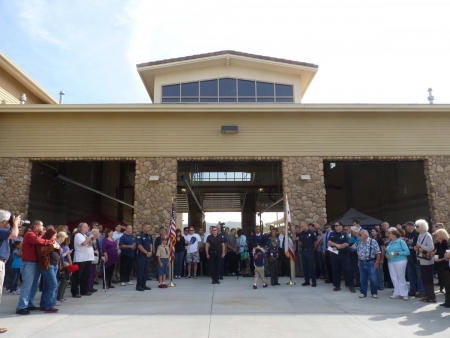 View videos of the Cedar Fire: