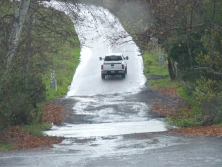 January 28, 2021 (San Diego’s East County)—A flash flood watch has been issued for San Diego County’s mountains, valleys and coatstal areas from 7p.m. Thursday to 4 p.m. Friday due to an atmospheric river moving across Southern California . The storm is forecast to bring widespread moderate to heavy rain and snow, with flash flooding possible.  If you encounter a flooded roadway, the Sheriff advises to "turn around, don't drown" since only a few inches of swiftly flowing water can quickly carry a vehicle into deeper water and submerge it.

Deep snow accumulations in the mountains will lead to difficult travel and chain restrictions for vehicles.  The storm is forecast to drop two to five inches of snow in local mountains. Snow levels are expected above 5,000 feet Thursday, dropping to as low as 4,500 feet by Friday. There is also a chance of thunderstorms, according to meteorologist Samantha Connolly with the National Weather Service.

The storm is expected to dump one to two inches of precipitation in San Diego’s mountains and between a quarter and three-quarters of an inch in the deserts.

The weekend is expected to be dry and warmer, though another storm system is possible next week with lesser amounts of precipitation.