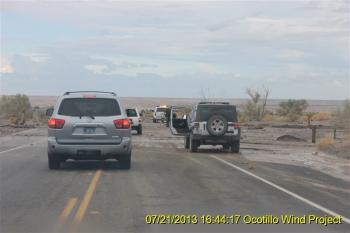 Photo: Debris in roadway at Ocotillo; photo by Jim Pelley

This evening, flash flooding caused a rocky ride for motorists on roadways in East County’s mountains and deserts.  Mudslides caused major delays along Highway 78 at Yaqui Pass in the Anza-Borrego area.  Boulders in the roadway are blocking Montezuma Valley Road, forcing closure. Portions of S-2 and Borrego Valley Road are also shut down due to flooding and debris.

Rainfall also washed out roads at the Ocotillo wind project. In addition, flash flooding was recorded tonight in Campo.

The National Weather Service advises monitoring later forecasts and be prepared to take action Should flash flood warnings be issued.