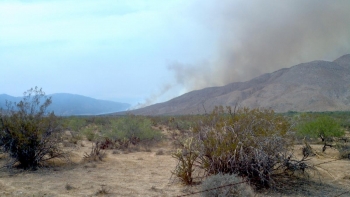 Update August 17, 2012:  All evacuation orders have been lifted.  The Lightning Complex Fires are now 85% contained at 22, 836 acres.  Flash floods and rainfall are forecast, with mud slides possible in recently burned areas.

August 16, 2012 (San Diego’s East County) – Cal Fire estimates that 19,625 acres have been scorched by the Vallecito Lightning Complex fires, which have thus far cost over $5.4 million to fight.  Firefighters have one more mile of containment line left to construct.

Ranchita residents remain evacuated. Highway 78 has reopened, however a hard closure of S-2 remains in effect between Scissors Crossing and Highway 79.

Completing the fire line in rocky areas is taking longer than expected, Roxanne Provaznik with Cal Fire advised.  Although the threat has lessened, engine crews remain in the community of Ranchita for structure defense.

“There remains a substantial risk of thunderstorm downdrafts. These winds have the potential to cause extreme fire behavior which will continue to challenge control lines as storms pass over the fire area,” she cautioned.

Any idea if structures in Ranchita were damaged, Miriam?

I am not sure about livestock though, some residents had concerns about animals left without water.  If anyone knows if there were losses to livsetock, please let us know.