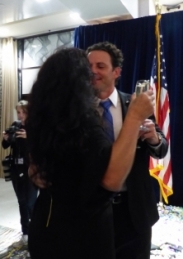 Desmond has supported the controversial Newland Sierra 2,135 unit housing development ostensibly to relieve the housing shortage in our region. The project was opposed by Gomez, who accused Desmond of being under control of developers, an allegation he has denied but did take hefty developer donations.

East County’s other  Supervisor, Dianne Jacob, will be termed out in 2020, along with Supervisor Greg Cox, when two more new faces will join the board.